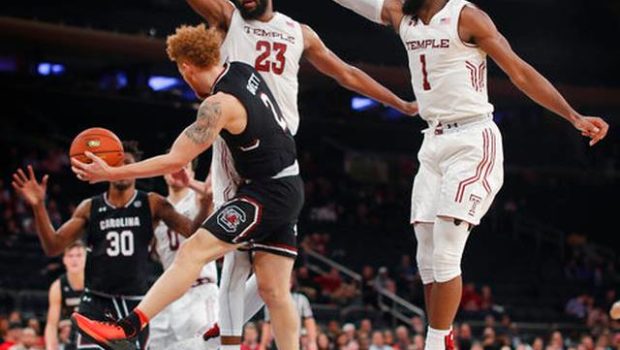 Quinton Rose scored a season-high 24 points to lead Temple, which improved to 4-1 with its fourth win in its last five games, to a 76-60 win over South Carolina at Madison Square Garden in New York.

Damion Moore finished with 20 points and 10 rebounds, and Obi Enechionyia added 15 points for the Owls.

Leading 38-27 at the start of the second half, Temple outscored the Gamecocks 16-12 in the first 8:20 to extend its lead 54-39. The Owls started the second half with two Enechionyia dunks and a jumper, a Moore jam and jumper, and eight points from Rose.

”I was going out there trying to be aggressive,” said Rose, who praised Moore’s play. ”It makes it a thousand times easier. The guy on defense has to make a decision earlier. If (Moore has) it going (the defender) knows I’m going to dump it off, but he also has to step up and stop me from scoring.”

The lead grew to 60-41 after Moore’s putback and layup on consecutive possessions. Following the layup with 9:39 left, Martin called time out. It did not matter as Temple pushed its lead to 23, 66-43, after Rose’s layup at 6:27.

”We kept missing shots and then turnovers,” Martin said. ”We had 17 turnovers (and) 12 of them were steals. You give Temple 12 steals (and) they’re coming at you in the open court. They’re going to make you pay almost every time.

The Owls’ modus operandi was simple: Get it inside. And oftentimes simple works. To wit: In Temple’s 16-point win, 38 of its 76 points were scored in the paint.