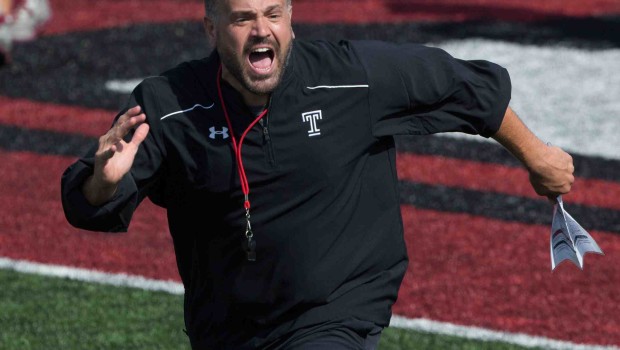 TEMPLE’S RHULE TO RUTGERS: WHY WOULD HE TAKE A STEP DOWN?

The hype around tomorrow night’s Temple-Notre Dame game has risen so high so fast that NJ.com has broken the sound barrier.

It has suggested in an article posted yesterday that Temple coach Matt Rhule is being mentioned for a lot of open coaching jobs, including Rutgers:

Rhule’s name is appearing on short lists for several more high profile potential head coaching jobs at schools such as Virginia, Maryland and Virginia Tech. Rhule also could be a candidate at Rutgers, where head coach Kyle Flood is under fire following a three-game suspension for violating school policy and contacting a faculty member to discuss a player’s grade. This fall, nine current or former Rutgers players also have been arrested in connection with home invasions and assault.

Excuse me, but why would Rhule, of sound mind, take the Rutgers job, which right now anyway is a step down?

And tomorrow, Temple becomes the center of the college football universe with ESPN’s “College GameDay” broadcasting from Independence Hall for the Owls’ showdown with Notre Dame at sold-out Lincoln Financial Field.

In 2013, Rhule was hired away from his post as an assistant offensive line coach with the Giants to take over a Temple program coming off a 4-7 season. It marked Rhule’s second go-around with the Owls after serving as one of Al Golden’s top assistants from 2006 to 2011. At that point, Temple had been to only four bowl games in 65 years.

The Owls finished 2-10 in Rhule’s first season before rebounding to go 6-6 in 2014. This season, the Owls have won four games on the road, including last week’s 24-14 victory over East Carolina, in which Temple was the underdog. The team now is ranked as high as No. 21 nationally.

Players and coaches heap credit for the turnaround on Rhule, the 40-year-old head coach with the boyish face, thick coating of stubble and infectious enthusiasm. Rhule blasts Jay-Z and Kanye West at practices, his Twitter avatar is a picture of the rapper Young Jeezy holding a Temple jersey and he talks a million miles a minute, hands waving and pointing.

And now, more eyes are on Temple football than perhaps ever before. For Rhule’s Tuesday morning press conference inside Edberg Olson Hall, the coach was met by nine microphones, eight video cameras and 39 reporters waiting to capture his every word. That type of audience has rarely, if ever, been focused on Owls football.

Rhule is a young coach on the rise, he played in the Big Ten at Penn State and he’s helped establish a strong recruiting footprint in New Jersey, the state where his starting quarterback (P.J. Walker), running back (Jahad Thomas) and best defensive lineman (Matt Ioannidis) are from. With a salary of $648,633 according to USA Today, Rhule also could be a bargain.

“I don’t even pay attention to it, honestly,” Rhule said of the rumored interest. “I don’t pretend to know what life’s going to bring. I don’t make promises I can’t keep. I’m not one of those guys. But I love it here. My family loves it here. I couldn’t be prouder to be the head coach at Temple.”

Rhule maintains he’s building for the future and planning to remain with the Owls. He said the program is redshirting 18 freshmen, and it continues raking in strong recruiting classes — thanks in large part to the program’s New Jersey inroads. Rhule also likes running the Owls’ scout team so he can spend extra time working with the program’s players of the future.

“He always jokes and says, ‘I’m not really doing anything; it’s the position coaches out here,'” Ioannidis said. “But at the end of the day, he’s the head coach. I think it’s his competitive attitude that just rubs off on everyone. He runs scout team sometimes and he gets in our faces on defense when they break a play.”