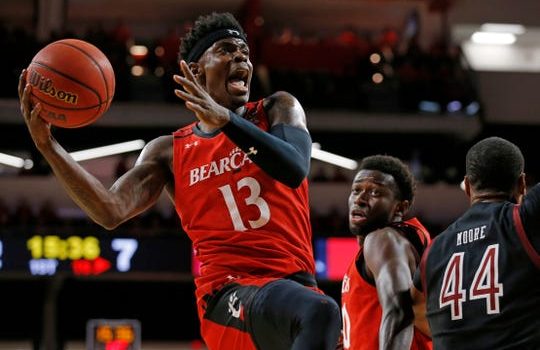 Trevon Scott’s tip-in with 2.8 seconds left lifted Cincinnati to a 64-63 win over Temple in the regular-season finale.

A loss to the Owls, beaten at home by Cincinnati by seven points on Jan. 22, probably would have left the Bearcats needing a third straight AAC Tournament championship to reach the NCAA Tournament. The Bearcats feel like they’ve been playing tournament basketball for a month, Brannen said.

Quinton Rose scored 19 points to lead Temple (14-17, 6-12), which has lost their last five games and six of their last seven. De’Vondre Perry added 10 for the Owls.

Mamoudou Diarra scored eight of his career-high 12 points in the second half and Keith Williams scored all 11 of his points after halftime to lead Cincinnati’s comeback from a 14-point intermission deficit.

Cincinnati didn’t take its first lead until Williams scored on a layup ro a 55-54 edge with 3:26 left in the game. That was the first of seven lead changes and one tie down the stretch. Cumberland scored on a spinning layup for a 62-60 lead with 1:04 left, but J.P. Moorman II connected on a 3-pointer for a 63-62 lead with 11 seconds left, setting up Scott’s game-winning outback.

Cincinnati shot just 24% from the field (6 for 25), including 1 for 10 on 3-pointers, while Temple was going 5 for 9 on 3-pointers on the way to a 31-17 halftime lead. Alani Moore II made three of the Owls’ 3-pointers for all nine of his first half points. Temple took command with a 14-4 run to close the first half.