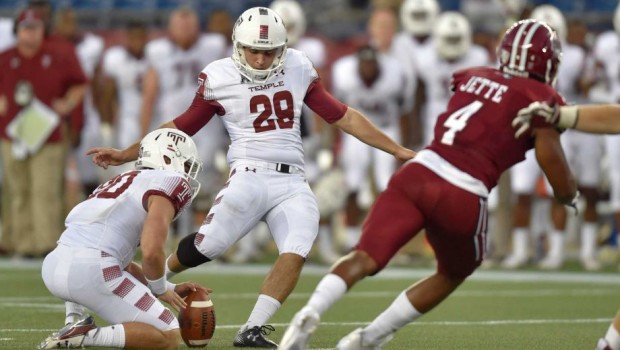 Austin Jones’ FG saved the days for the Owls.

Temple waited until the last 12 seconds to stay undefeated against the Minutemen yesterday in Foxboro, Mass.

Temple (3-0) led, 20-17, with 3:27 left in the fourth quarter when UMass took over at its own 30-yard line. After a 3-yard run by Lorenzo Woodley, quarterback Blake Frohnapfel tried to beat double coverage on a pass to Rodney Mills. But the ball was underthrown and intercepted by Stephaun Marshall at UMass’ 49.

The Minutemen’s defense, which had slowed and frustrated Temple all game, again came through. John Robinson-Woodgett, a Worcester Academy alum, stripped running back Jahad Thomas, and Kelton Brackett dove on the bouncing ball, giving UMass new life with 2:45 left on their own 41.

With the crowd of 10,141 and the Minutemen sideline cheering hopefully, Frohnafpel directed an eight-play, 59-yard drive that he capped with a little flip pass to Jamal Wilson to avoid pressure. The tailback raced to the end zone for the 16-yard TD with 1:25 left that made it 23-20.

But Nate D. Smith blocked Blake Lucas’ extra point, and Marshall scooped the ball. He lateraled it to Will Hayes, who ran it all the way back to the other end zone for a rare defensive 2-point conversion making it 23-22. UMass center Matt Sparks was called for unsportsmanlike conduct on the play, forcing a kickoff from the 20.

After the return gave the Owls the ball on their 35, P.J. Walker marched Temple to the Minuteman 27, where it was third-and-6. The Owls called their last time out to decide between a 44-yard kick there or another play. They chose the play, and Walker hit John Christopher on the left sideline at the UMass 15. He stepped out of bounds to stop the clock.

Jones’ kick was true with 12 seconds left. After fielding the bouncing kickoff, the Minutemen couldn’t pull of a miracle from its on 34 and left the field dejectedly.

“With the blocked extra point returned for two, you never really see that,” Frohnapfel said. “To have it play out that way, it’s obviously not what you’re expecting. We scored that touchdown, and everyone’s all excited, but you still have to finish every single play. We learned our lesson the hard way, but I think there’s a growing experience from it.”