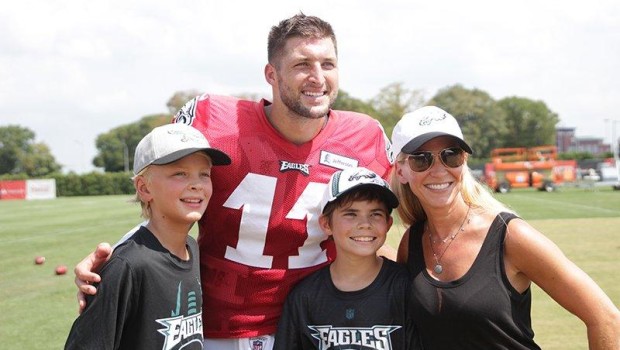 We are counting down the days to the end of what history will record as the most bizarre sports experiment since Michael Jordan quit the NBA and tried to make it as a baseball player!

Tim Tebow is getting his last chance this offseason to prove he should stay with the Eagles as their third-string quarterback.

The 2007 Heisman Trophy winner is expected to see a lot of playing time in Philadelphia’s final exhibition game on Thursday against the New York Jets at MetLife Stadium.

”It’s been an awesome journey,” Tebow said after Monday’s practice.

Tebow, now competing with Matt Barkley for the roster spot, won a national title in college at Florida and led the Broncos to a playoff game win in 2011. But he hasn’t played a regular season game since 2012 and was out of football after New England released him two years ago until Eagles coach Chip Kelly signed him this spring.

In limited action in all three preseason games, and playing with all third and fourth-team players, Tebow has completed 10 of 19 passes for 97 yards without a touchdown or an interception. He has also run 10 times for 50 yards, with three first downs and a touchdown.

”He’s had a good camp,” Kelly said. ”He’s got another big week this week.”

”Stay focused, know what you have to do and then go do it,” he said. ”I’m not nervous. I’m excited, but I’m always excited.”

His competition, Barkley, is in his third year with the Eagles after being selected in the fourth round of the 2013 draft out of Southern California.

But don’t expect the players to feud over a job.

”I consider him a good friend. He has a great family,” Tebow said. ”Sure we’re competing, but you want to do things the right way. And opportunities and positions are never more important than character.”