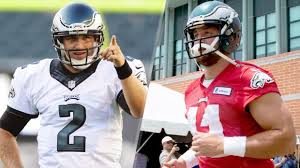 BARKLEY VS. TEBOW: BAKE-OFF FOR NO. 3 QB FOCUS OF EAGLES NATION!

If you want to gauge just how solid the rest of the Eagles are, consider that the competition between Tim Tebow and Matt Barkley for the No. 3 quarterback slot is now what we are all focusing on.

The No. 3 quarterback, which if he ever has to play due to injury of Bradford or No. 2 Mark Sanchez — the Eagles would be out of the game anyway!!!

Tebow and Barkley have battled for the role of third quarterback on the Eagles for the past four months, knowing the loser would most likely be looking for a job with another team or in another league.

That battle is in its final days. Just one more preseason game remains for the Eagles, tomorrow night against the Jets. Barkley will start the game, and Tebow will most likely get the entire second half.

After the game, the Eagles coaches will convene and cut the roster from 75 to 53 by the NFL deadline of Saturday at 4 p.m.

Both Tebow and Barkley know what’s at stake. To NFL fans everywhere, this is the most meaningless of the four preseason games because most of the starters won’t play. That includes starting quarterback Bradford and backup Sanchez. But for those battling for one of the final roster spots, this is their Super Bowl.“I don’t feel any pressure at all,” Barkley said. “I don’t think it’s anything except an exciting opportunity. I’ve been in this place before to have to impress and move the ball down the field.”

“I wouldn’t say [I’m] more nervous,” he said. “I always get excited, nervous for every time I step foot on the field for practice or a game.”

It’s clear that neither Barkley nor Tebow has separated himself in the three preseason games. Barkley is 23-for-43 passing for 306 yards with no touchdowns and one interception. Tebow is 10-for-19 for 97 yards with no TDs or interceptions.

Tebow has rushed 10 times for 50 yards with a touchdown. And the Eagles tried him on two 2-point conversion attempts Saturday night against Green Bay – both failed. That running ability could swing the decision in Tebow’s favor, although Tebow’s accuracy has always been a factor. He has completed just 47.9 percent of his passes in his career. That could explain why he hasn’t played in a regular season game since 2012. He was cut by New England in training camp in 2013.

Eagles coach Chip Kelly, who said this is a “big week” for Tebow, won’t keep both quarterbacks. He might not keep either, depending on the quarterbacks released from other teams.