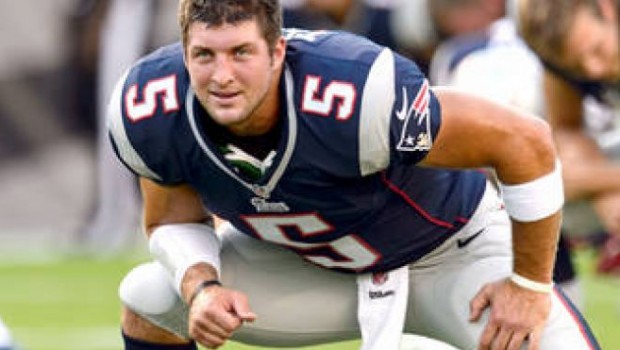 TEBOW AS AN EAGLE TWO-POINTER? GET SERIOUS!

When Tim Tebow was signed last Monday as the Eagles’ fourth-string quarterback/Wildcat fullback/prayer in chief — you get my point — everyone from Michael Barkann to John Boehner, both of whom know nothing, have weighed on the one question:

But as usual, ProFootballTalk.com’s Mike Florio brings everyone back to earth:

In the six days since Tim Tebow’s 19-month NFL exile ended, a popular theory has emerged regarding Chip Kelly’s plan: Tebow will be the team’s two-point quarterback.

With NFL owners potentially moving the two-point conversion closer next month in order to entice more teams to eschew the near-automatic one-point try, the thinking is that Kelly would use Tebow as his quarterback in that situations.

But here’s where the logic falls apart. A two-point conversion from the one-yard line wouldn’t be a novel play for the NFL. It would simply be another situation in which teams face short yardage. So if Tebow is going to be the two-point quarterback, wouldn’t he also be the guy who takes the snaps on third-and-one or fourth-and-one or third- and fourth-and-goal from the one?

But Kelly may welcome the belief that he has signed Tebow as a two-point quarterback if that perception makes the league’s owners (who would benefit financially from Tebow having relevance to the NFL once again) more inclined to move the two-point conversion closer. It’s no secret that Kelly likes the two-point try; he presumably would go for it more often if it were closer. And if the owners think that would mean more Tebow, that could be the factor that pushes the change through.