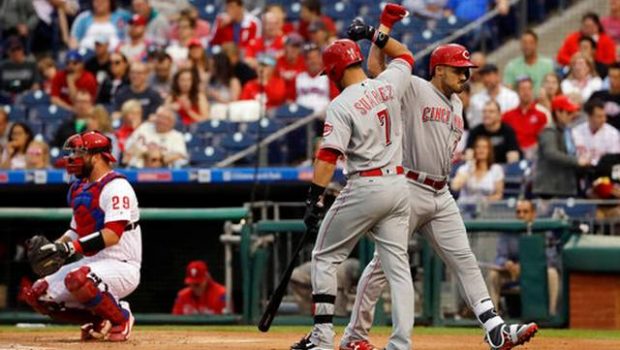 A TEAM MEETING AFTER PHILLIES DROP ANOTHER TO REDS 5-2!

The Phillies still can’t hit to save themselves, and manager Pete Mackanin called another team meeting.

This getting tedious, and it’s only late May!

Andres Blanco’s first-inning single was all the Phillies got off Adleman. He struck out four and walked two.

The Phils are 5-21 since an 11-9 start. Manager Pete Mackanin, who received a contract extension two weeks ago, called a team meeting afterward.

Duvall followed Joey Votto’s RBI groundout in the first with his 11th homer. Schebler connected to straightaway center for his 14th homer in the third.

Aaron Altherr hit an RBI double off Asher Wojciechowski in the ninth and another run scored on a bases-loaded grounder, but Raisel Iglesias struck out Maikel Franco with two runners on for his ninth save.

Wojciechowski had not pitched in several days and Price wanted him to get an inning of work before making a start against Toronto on Tuesday.

Adleman retired 16 straight batters at one point and got 16 outs on grounders.

“I like it when I can stand out there (in the outfield) and watch everyone else do the work,” Duvall said.