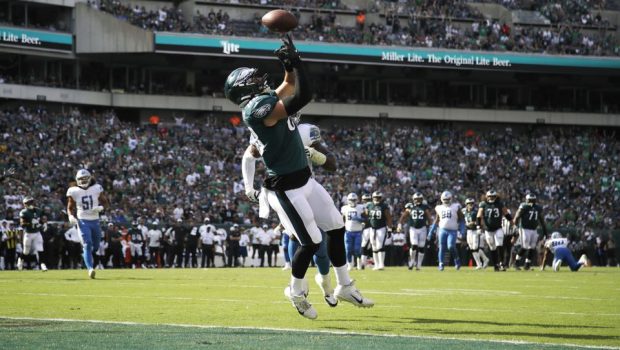 TE DALLAS GOEDERT WAS AN EAGLES HERO AMID PLENTY OF ZEROES!

The Eagles 17-10 loss to the Pats yesterday was a gut-wrenching nightmare.

And here’s a snapshot of the heroes and zeroes, courtesy of Pro Football Focus:

Nathan Gerry had the only sack for the Eagles’ defense. He made several stops in run defense as well as in coverage. He did, however, miss a tackle on Rex Burkhead on a screen play that went for a big gain.

Avonte Maddox was targeted often and gave up a bunch of first downs in coverage. He also was flagged for a pass interference call. He did break up a pass that he may have intercepted if it weren’t for Julian Edelman playing “defense” on the pass.

Carson Wentz was frequently off-target throughout the game. Some of his notable misses were on a deep pass to Mack Hollins and an overthrow of Nelson Agholor on a crossing route in the end zone.

Dallas Goedert made some big plays for the Eagles’ offense. He caught a screen and turned it into a chunk play and then caught a contested five-yard touchdown in the second quarter. He did have a couple of drops to go along with his big plays.