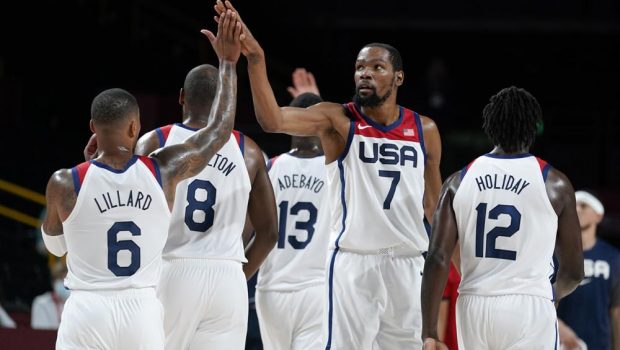 TATUM, DURANT LEAD THE WAY AND USA IS ON TO KNOCKOUT STAGE!

The USA is headed to the quarterfinals at the Tokyo Games — with a shot of being good as gold once again.

Jayson Tatum scored 27 points, Kevin Durant added 23 and set a pair of USA Basketball men’s Olympic records, and the U.S. defeated the Czechs 119-84 today to clinch a berth in the knockout stage.

Zach LaVine scored 13 points, Jrue Holiday had 11 and JaVale McGee finished with 10 points for the U.S. The Americans shot 7 for 20 in the first quarter — then made 33 of 44 shots over the next 26 minutes, including a staggering 21-for-25 start to the second half.

The U.S. (2-1) finished second behind France in Group A, but will join the French, Australia and the winner of Sunday’s game between Slovenia and Spain as a top-four seed for Tuesday’s quarterfinals based on FIBA’s tiebreaker system that includes point differential.

Those quarterfinal matchups will be decided in a draw on Sunday night, but the U.S. has now assured itself of not having to face any of the three group winners until at least the semifinals.

Blake Schilb scored 17 for the Czech Republic (1-2), which led by 10 early and was still up 60-54 midway through the third quarter.

In a flash, the Czech hope of a stunner ended there.

Durant — who passed Carmelo Anthony as both the U.S. Olympic men’s all-time points and all-time field goals leader during the game — hit a 3-pointer to end the third quarter, capping a 22-6 run that put the Americans up by 22 going into the final quarter.

The outcome was not in doubt again.