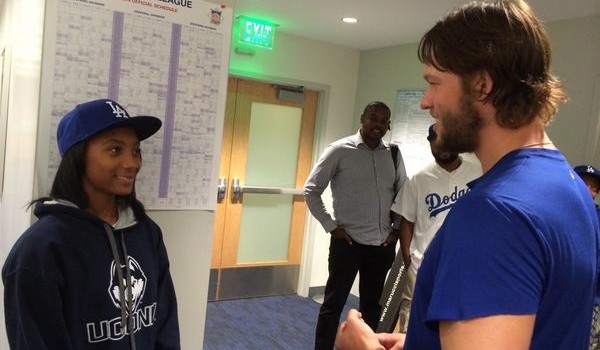 TANEY’S MO’NE DAVIS VS. THE NCAA — WHO YOU ROOTING FOR?

The Taney Dragons’ Mo’Ne Davis led her team to the Little League World Series, but now she is facing an opponent even she may find unbeatable:

The NCAA and its ridiculous rules about recruiting.

Mo’Ne has had a chance to meet, and/or receive congratulations from, a slew of public figures. Apparently, one of those public figures was Geno Auriemma, and he now says that his congratulatory phone call to Davis resulted in another school filing a complaint with the American Athletic Conference, alleging that Auriemma had committed a recruiting violation.

Auriemma told the Hartford Courant that the phone call wasn’t even his idea. From the Courant:

Auriemma said he was asked to call Davis through a phone call from a friend who had been contacted by the NBA’s Philadelphia 76ers. The 76ers thought it would be a good idea to reach out to her “because she loves basketball, and congratulations or something seem in order,” Auriemma said.

Auriemma was then contacted by the communications office of Little League and it was agreed that he would just call and relay a message. When Auriemma called, Davis was in the room and was handed the phone.

“The conversation lasted like two minutes and we hung up,” Auriemma said. “And then I was told a school turned us in for a recruiting violation because we are not allowed contact of July 1 before her junior year of high school. … That’s the world that we live in.”

Davis plays basketball in addition to baseball, and she has said that she would like to follow in the footsteps of her idol, Maya Moore, and play hoops for U-Conn. before moving on to the WNBA. Davis has frequently been seen wearing a Connecticut sweatshirt, including on Tuesday in Los Angeles, when she threw out the first pitch at a Dodgers game.