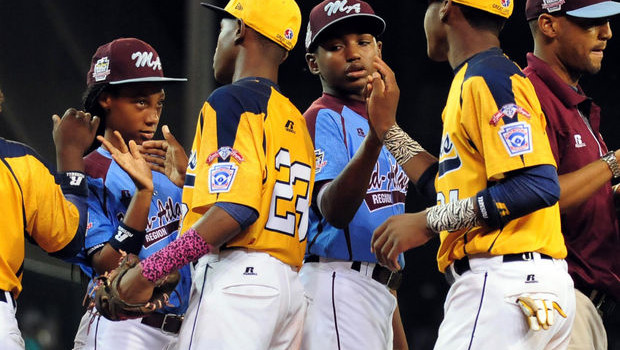 When Philly’s Taney Dragons got beat by Chicago’s Jackie Robinson West in last summer’s Little League World Series (photo above), much of this town toasted the Dragons and the great Mo’Ne Davis.

And then we watched as Jackie Robinson won the LLWS and we were happy for those kids.

Yesterday came word that Robinson had been stripped of it title because of a residency rule infraction, and we were sad.

Everybody was sad for the kids.

He chalked it up to the corruption of Chicago politics!

When the news broke that Chicago’s great baseball team — Jackie Robinson West — had been stripped of its national Little League title, the inevitable happened.

America asked: Is there nothing in Chicago — birthplace of the Chicago Way — that isn’t corrupt?

The mayor of Chicago weighed in and the president from Chicago too, as did other politicians. Because the team was African-American, certain reverends played the race card. Supporters of the Little League’s decision played the rules card.

And there was so much anger that it didn’t feel like baseball.

At the Jackie Robinson West home field on the Far South Side, in the Washington Heights neighborhood, about 2 feet of snow covered the baseball field.

Marcus Evans, 35, a neighborhood man who said he played for Jackie Robinson West years ago, was grieving.

“We was happy! Everybody was together,” Evans said, remembering the happy events of last summer. “The mayor was out here. Everybody who hadn’t seen each other in a long time. They brought the hood back together. We was happy. Now there’s this at the wrong time with all the racial tension. … Chiraq and all that stuff.

“We was happy to see the little homeboys doing it. And now they took it away from us.”

The sad news prompted typical responses. Those who see almost everything in terms of race saw it that way, and others who say rules are rules wagged their fingers.

“Is this about boundaries or about race?” Jackson wondered.

And the finger waggers wagged their fingers, because they know what to do as well, and they said it was all about rules and standards. I’m almost inclined to be on their side.

Because we all know that you can’t be a Little Leaguer and violate the rules and standards.

Naturally, the kids are upset, the parents are upset, the fans of JRW are upset and chances are you’re upset, too. I know I’m upset. The adults who run Jackie Robinson West cheated, and they got caught and ruined everything for everybody.

Watching the team of kids from the South Side of Chicago, an African-American team with excited parents and grandparents, roll through the Little League World Series was the feel-good story of the year.

We needed it, especially with negative and depressing stories out there, with 9-year-old Antonio Smith gunned down by gangsters, with fires and looting in Ferguson, Mo., with angry voices raised and race hustlers playing the race hustler game.

This was an antidote of sorts, and we cleaved to it — at least I did — loving every minute of the team’s run, watching the players’ parents and their grandparents cheer.

We loved the way they played. Mayor Rahm Emanuel loved it and so did just about every politician in the state.

The team did bring the city together. And not only the city but the suburbs too, and the rest of the state. And we either rushed home to watch the games or insisted that no one tell us the score so we could enjoy it later.

And a particular kind of rule that Chicago’s rulers know all too well, a residency violation; and a suspect, perhaps cynical map, drawn up to allow certain players to be on the team even if they didn’t rightfully belong.

If Chicago knows anything, it’s about residency and maps.

Residency rules cannot be violated, and residency maps must be respected, or you can’t be a Little Leaguer. We know this now.

But you can still become a mayor. Or you can be elected congressman of a convoluted district, with a cynical map that can snake for miles down one lane of highway to grab some voters and cut out others.

If you’re a powerful politician, your friends draw the maps, or you have lawyers interpret the rules.

For example, Rahm Emanuel was living and working in Washington, D.C, as President Obama’s chief of staff. But outgoing Mayor Richard Daley wanted a caretaker.

And even though Rahm lived in Washington — and the rules were clear that you had to be a resident of Chicago to run for mayor — an amazing thing happened.

The courts ruled that Rahm was actually a resident of Chicago even though he lived in Washington. There was a wedding dress in a crawl space of the Emanuel home in Chicago.

Interestingly, many of the finger waggers didn’t wag their fingers in outrage over Rahm’s residency. But it’s a good thing he wanted to be mayor, and not a Little Leaguer.

Because in Chicago, politics ain’t beanbag. It’s not even baseball. It’s politics. And there are rules.