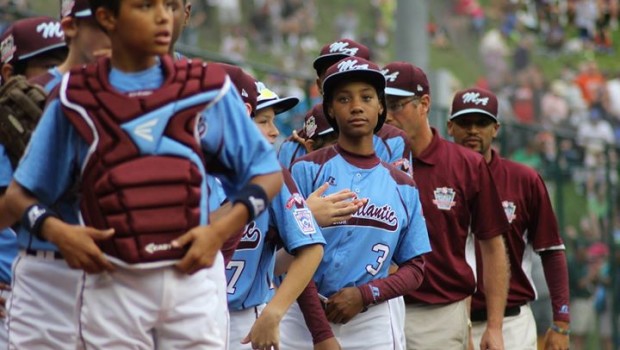 TANEY AND MO'NE WISH VEGAS HAD STAYED IN VEGAS

Philly’s and destiny’s darlings are crushed by Nevada, 8-1, play Illinois tonight to salvage another chance in the Little League World Series

Austin Kryszczuk burst the bubble that Philly’s Taney Dragons and Mo’ne Davis had created in the Little League World Series.

Kryszcuk was not the reason why 34,128 fans and 375 members of the press came to Howard J. Lamade Stadium in South Williamsport, Pa. last night. But they remember him for a long time because he was the star of Nevada’s 8-1 victory, which sent it through to Saturday’s U.S. championship game.

Nevada had won its first two games by score of 12-2 and 13-2, hitting five home runs in that second victory and establishing itself as the heavy favorite in Vegas. The fact that you could wager on them seemed to phase the Nevadans as much as their unusually publicized opponent. Kryszczuk roped a triple off Davis with no outs in the top of the first, driving in his team’s first run, and he drove in another with a single in the top of the sixth. In three games, he is 8-for-11 with two homers, six RBI and seven runs scored.

Even more important, though, were Kryszczuk’s contributions on the mound. Nevada seemed to be cruising along in the top of the fourth inning – it led 3-0 – when trouble stuck. Davis drew a walk to load the bases with no outs, but ball four squirted to the backstop, allowing Zion Spearman to race home with the first Pennsylvania run. Nevada brought in Josh Zuehlsdorff, but a perfectly placed bunt by Pennsylvania’s Tai Shanahan loaded the bases again. It was time for Kryszczuk, who throws 75 MPH gas.

In short order, Kryszczuk struck out the first batter he faced, and then induced the next to line into an inning-ending double play. The threat was over, but Kryszczuk stayed in to finish the job. In all, he worked three innings, struck out six, issued one walk and didn’t allow a run.

As for Davis? She famously said, “I throw my curveball like Clayton Kershaw and my fastball like Mo’ne Davis,” and the trouble on Wednesday was that Mo’ne Davis’ Mo’ne Davis-like fastball was consistently up in the strike zone, where the precocious Nevada hitters could get to it. She allowed that RBI triple to Kryszczuk in the first on a high fastball, and a two-run homer to No. 8 hitter Dallan Cave in the second on a similar pitch. By the time she exited with a three-run deficit with one out in the third, she had recorded six of her seven outs by strikeout, but when Nevada had managed to make contact, it hit the ball hard. Nevada produced six hits, and those were largely the result of Davis’ fastball location.

So, that’s the baseball analysis. Davis is a real baseball player, if a 13-year-old one, and she deserves it. The other part of the story was that her accomplishments — which earlier in the week had made her the youngest athlete ever to appear on the cover of Sports Illustrated — were in no way diminished on Wednesday. Sometimes, great athletes and great teams, like Davis and Pennsylvania, lose to great athletes and great teams like Austin Kryszczuk and Nevada.

In the bottom of the sixth, Davis, leading off the inning, stuck out looking on a Kryszczuk fastball. She has become famous almost as much for her steeliness as for her talent and her gender, but here, for perhaps the first time, she showed some emotion. “Oh my god,” she mouthed, as she trotted back to the dugout, frustrated.

Though she had acquitted herself well, it was simply not her night. She won’t have much time to dwell on it. Pennsylvania is due to play Illinois, which on Sunday received one of Nevada’s drubbings, at 7:30 p.m. Thursday. If Pennsylvania wins, Davis will be eligible to start again against Nevada on Saturday, by virtue of the fact that she threw just 55 pitches on Wednesday, 10 short of the threshold that would have ruled her out.