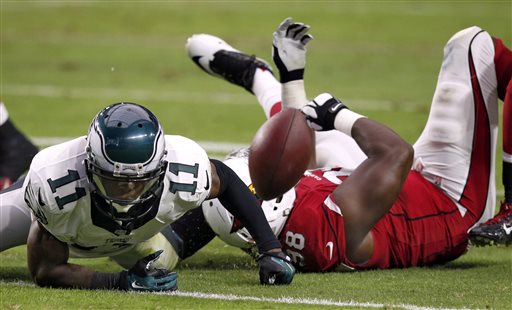 Huff’s fumble against Cards is a good example of the Birds’ red zone woes.

However, they don’t always tell the whole story.

Especially in the National Football League, which as everyone knows stand for:

Which perfectly describes the Eagles’ lofty 5-2 record unless they can transform their gaudy offensive numbers into the only thing that matters:

But football isn’t played on paper, and when you dive below the surface, you begin to see why the Eagles have some legitimate reasons to be concerned as they try to hang with first-place Dallas entering November.

Because the Eagles have scored a league-high seven non-offensive touchdowns, those points-per-game numbers aren’t indicative of how the offense has performed.

Remove the points created by the defense and special teams units from the equation, and Philly would actually rank below the middle of the pack with 22.0 points per game.

Yes, most other teams would take a small step backward when losing their non-offensive touchdowns, but nobody else in football has scored more than three times in those situations.

Defensive and special teams touchdowns aren’t sustainable and can’t be relied on, which explains why the Eagles came back to earth and had their “scoring problem” exposed in Sunday’s 24-20 loss to the Arizona Cardinals.

Against, the Cardinals, the Eagles became just the 20th team in NFL history to go over 500 yards but be held to 20 or fewer points. Their issues in the red zone were the main culprit, as Philly came away with zero touchdowns on three trips inside the Arizona 20-yard line.

Now, their red-zone touchdown rate has fallen below 35 percent. Nobody else in football is under 40.

How does that happen? Well, it doesn’t help that the Eagles turned the ball over twice inside the 20 on Sunday and have now done so four times this season. Nobody in the NFL has committed more turnovers in that area of the field.

On Sunday, rookie receiver Josh Huff fumbled when failing to secure the ball while darting inside the Arizona 10-yard line in the second quarter.

The Cards recovered that, and they also came away with a turnover on the following drive when Antonio Cromartie stepped in front of a Nick Foles pass intended for Huff in the end zone for an interception. There, Foles made a rookie mistake by holding on for too long before throwing an ugly, unbalanced pass into the middle of the field.

The Eagles also had red-zone turnovers against Jacksonville and the Giants. You can’t afford to be that sloppy deep in enemy territory.

But even without taking those turnovers into account, they’ve often been paralyzed by questionable play calls and a simple lack of execution.

Twice now this season, the Eagles have been stuffed at the goal line with the game on the line in the fourth quarter.

They had 3rd-and-goal at the San Francisco 1-yard line down five with two minutes to play in Week 4, but head coach Chip Kelly had Foles in shotgun and ran passing plays on both third and fourth down. The running game wasn’t having a good day, but that’s just ridiculous.

Not having your big, tall quarterback under center when you’re one yard out of the end zone makes things easier on the opposing defense.

Kelly outthought himself there, and he became a goal-line-botching recidivist Sunday when he once again had Foles in shotgun on 3rd-and-inches from the Arizona 1-yard line with two-and-a-half minutes left in a tie game.

The draw to running back LeSean McCoy went nowhere, and it was another example of Kelly getting too fancy.