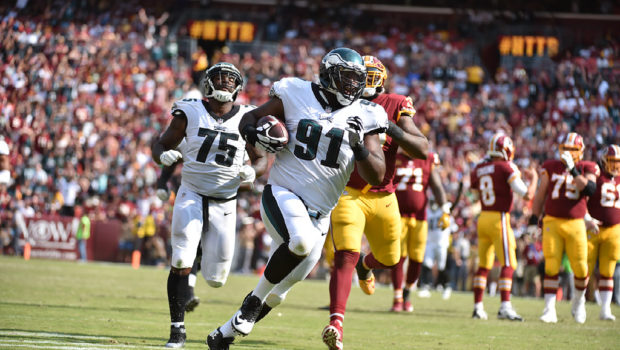 TAKEAWAYS ARE THE NAME OF THE EAGLES’ DEFENSIVE GAME!

Carson Wentz and the Eagles’ run game get most of the attention for this 9-1 season, but the Birds’ defense has stiffened enough to make it a game-changer.

And Jim Schwartz’s unit is running the Eagles defense thrives on takeaways.

In all but one of their first 10 games (the lone game they lost, to the Chiefs in week 2), the Birds have stolen possession of the ball, and their plus-10 turnover differential ranks second in the NFL behind only the Jacksonville Jaguars, whose defense might actually be the sole reason they appear competent even in a largely incompetent AFC South.

Those kind of numbers, coupled with the low turnover output of Wentz on the other side of the ball, make for championship-level contention.

Schwartz’s unit finished in the league’s top 10 in takeaways in 2016, so it’s not like the Eagles are just suddenly stumbling upon awkward bounces. But what’s more dangerous than the possibility that high turnover rates are a byproduct of good Schwartz scheming is the fact that the Eagles’ defense is far better than it was a year ago despite being bruised and battered at every level.

Pro Bowl anchor Fletcher Cox is on the field now, but he missed time, and starting middle linebacker Jordan Hicks, a criminally underrated big-play machine, has missed a whole lot more on Injured Reserve. Big-name cornerback Ronald Darby, the Eagles’ big preseason catch in a trade with theBuffalo Bills, also went down for nine weeks, teaming up with second-round pick Sidney Jones on the sidelines as the premier, albeit ailing, future pillars of the secondary.

And what have the Eagles done in their absence? Only picked off 14 passes, forced six fumbles, surrendered the seventh fewest yards per game and stuffed opposing backfields as the NFL’s No. 1-ranked run defense.

Teams haven’t struggled getting into the teens and the 20s on the scoreboard against the Eagles, but Philly’s defense has never outright broken in 2017, and that’s a miracle in and of itself considering Hicks and Darby went down, leaving one year of total pro experience between the starting corners on Opening Day. No, instead, they’ve thrived, swarming the trenches with Cox, Tim Jernigan and Brandon Graham; containing the middle with Nigel Bradham and a rejuvenated Mychal Kendricks; and attacking at the back end with Malcolm Jenkins, Rodney McLeod and the ever-confident Jalen Mills.

Depth is somehow in abundance up and down Schwartz’s lineup, and the scary thing come playoff time is that the Eagles should be even better. In his first game since Week One, Darby was all over Dez Bryant on Sunday, snagging one of Prescott’s three picks. Jones isn’t even needed in the secondary — an impossible thing to suggest just a few months ago — but might be available. Vinny Curry is still heating up as a run stopper up front. And Patrick Robinson, a fringe journeyman when he joined the team on a prove-it deal over the offseason, is the sturdiest of them all, proving each week to be a pleasant (shutdown) surprise in the slot.