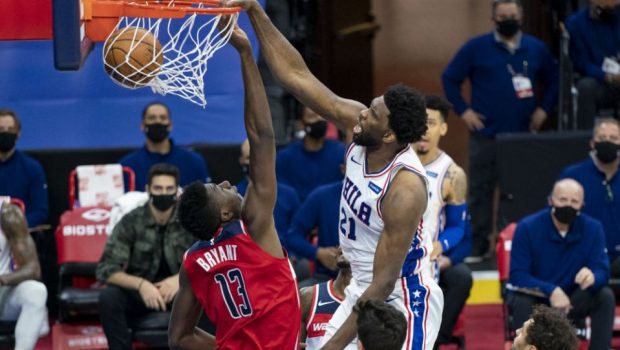 If you don’t think Joel Embiid has a new-found focus on winning, you should have seen him last night.

He scored 38 points and the Sixers overcame Bradley Beal’s first career 60-point game in a 141-136 win over the Wizards.

The Sixers are an NBA-best 7-1 in coach Doc Rivers’ first season in Philly.

Beal scored 57 points through three quarters and seemed poised to not only smash the 60-point mark, but complete Washington’s rally from 21 points down.

Embiid snuffed that out in the fourth, scoring 11 points to just three for Beal.

Beal was stuffed on a layup and missed a 3-pointer inside the final minute, nearly coming up short of joining Golden State’s Stephen Curry as 60-point scorers this season. Curry scored a career-high 62 points on Sunday night.

Beal, who once scored 53 and 55 points in consecutive games, sank a free throw with 4.4 seconds left to hit the mark. He went 20 of 25 from the floor, made 7 of 10 3-points and went 13 of 15 from the line to match former Wizard Gilbert Arenas for the franchise single-game mark.

“There’s no reason anybody should drop 60 on us,” Embiid said.

He hit seven 3s and reached 57 points through three quarters, and that should have been enough to give the Wizards the lead. But Washington’s defense was atrocious in the first half. They gave up 82 points and trailed by as many as 21 points, Beal outscoring the rest of the Wizards.

“He can score a lot of points on any team on any given night, but he wants to lead us in victories,” coach Scott Brooks said.

Beal failed to win again on a night on which he topped 50 points.

“All my career highs have been losses,” he said. “I don’t give a damn.”

Embiid again carried the Sixers after a rare slow start and continued his torrid early season run. He missed all six shots in the first quarter and scored one point. He then scored 14 in the second and helped the Sixers roll to a 19-point lead.

Embiid tossed in a fadeaway and made the free throw to give the Sixers a 131-127 lead. His second three-point play in 90 seconds made it 134-131. He then buried a 3 to seal Philadelphia’s fifth straight win.

Seth Curry hit six straight 3-pointers in the first half and finished with 28 points. Ben Simmons had 17 points and 12 assists. Tobias Harris scored 19. The Sixers made 18 of 29 3-pointers and shot 62% overall from the floor.

Russell Westbrook played with a dislocated finger on his right hand and scored 20 points for the Wizards.