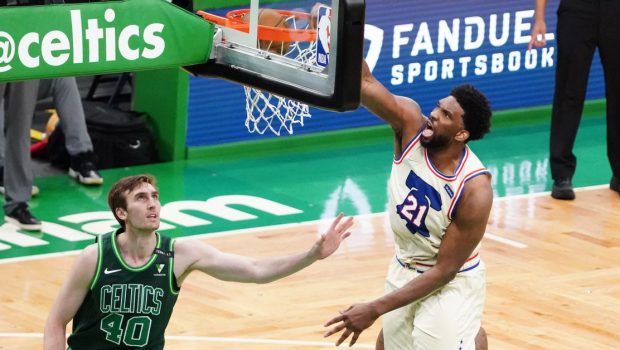 Joel Embiid scored 35 points and the Sixers stayed tied with the Nets atop the Eastern Conference with a 106-96 win over the Celtics.

Danny Green added 17 points as the 76ers posted their third straight victory over the Celtics to sweep the season series.

The 76ers have won both games since Embiid returned from a 10-game absence while he recovered from a bruised bone in his left knee. They have won three of four overall and led by 21 in the second half of the opener of a four-game trip.

Jayson Tatum led the Celtics with 20 points, and Jaylen Brown finished with 17.

Center Robert Williams, who has played some of his best basketball since joining the starting lineup six games ago, picked up two quick fouls in the first five minutes of the game and was forced to the bench.

Embiid seized on his absence and finished the opening period with 12 points.

It pushed Embiid out of the lane, but he was able to pass out of double teams. He helped his teammates find their shot in the second quarter. Green had three 3-pointers and 11 points during a 15-0 run that put Philly in front 52-37. Green was 5 of 6 from 3 on the night.