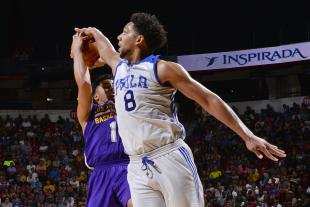 The Sixers’ Jahlil Okafor last night gave the Los Angeles Lakers a taste of what they missed by passing him by in last month’s NBA draft in favor of point guard D’Angelo Russell.

The 6-11, 270-pound center finished with 19 points (6/14 FG, 7/12 FT), 11 rebounds, three assists, and two blocks (including one on Russell, above) in a 68-60 Las Vegas Summer League loss, earning praise from assistant coach Lloyd Pierce, who is serving as head man for the Sixers in Las Vegas, and approval from his harshest critic, himself.

After his debut game in Utah last week, Okafor gave himself a C- for his 20-point, nine-rebound performance. Against the Lakers, his efficiency (19 points on 14 shots versus 20 points on 22 shots), playmaking (three assists versus one), and proficiency at the free-throw line (7-of-12 versus 0-of-4) earned him a B-.

“It’s progress, that’s what it’s about,” Okafor said after the game.”It’s a long progression I’m going to have to make. I’m only 19, so I have a lot of time. I’m just trusting the process.”

Exactly one year and six days ago, Pierre Jackson ruptured his Achilles during his debut game with the Sixers at the Orlando Pro Summer League. The injury sidelined required surgery that sidelined the 2013 second-round pick for the entirety of the 2014-15 season, but on Saturday Jackson finally made his return to the court, playing in front of family and friends in his hometown of Las Vegas.

The explosive point guard got the starting nod and scored 15 points in 27 minutes, second only to Okafor’s 19. His 5-for-11 clip from the floor led the Sixers, who shot just 28.6% from the floor on the night. He made three of the six three-pointers he attempted. Still, Jackson felt that he could have done more had it not been for some early nerves.

Spending all of last season rehabbing in Las Vegas, Jackson kept close tabs on the Sixers, hoping to one day rejoin the team. He’s close with a number of returning members of the team but also will Jahlil Okafor, whom he met while the two were still prep players. Jackson was extremely impressed by the play of his new teammate on Saturday.

“His hands are huge, and he does this little thing with the ball, it’s crazy… I don’t even… He’s just really good,” Jackson said while pantoming the one-handed pass fake that Okafor has made a staple of his game. “His patience on the post [has improved a lot], knowing when to pass the ball and knowing when to be aggressive.”