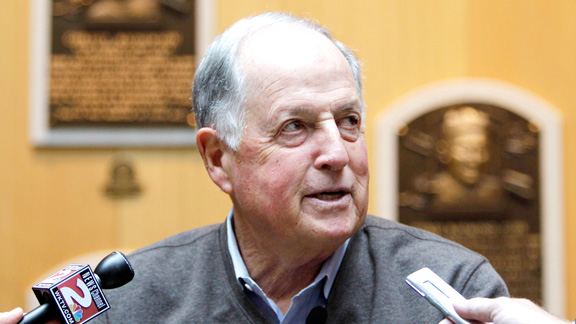 I bought my Philly Daily News this morning and immediately turned to the back cover, as I always do to check what the sports lead is. And I cringed.

And I was pissed off!

Hall of Famer Pat Gillick (photo above) is stepping in for Phils president David Montgomery, who is recovering from cancer surgery. There are few baseball men I respect more than Gillick, who was general manager when the Phils began their extraordinary run to the World Series culminating in the 2008 title and the 2009 NL title.

He stepped aside and Ruben Amaro Jr. was promoted to GM, and he has run this franchise into the ground. He doesn’t know how to evaluate talent and he doesn’t know the money.

So I was fuming when I started to read Ryan Lawrence’s dispatch from Atlanta, only to find that whomever wrote the headlines on the back cover played fast and loose with what Gillick actually said:

“They’re under contract,” Gillick said just outside the visiting dugout at Turner Field before the Phillies took batting practice. “Ruben is under contract through ’15 and Ryne’s under contract. So right now there’s no thought whatsoever of replacing either one.”

“So right now” is the operative phrase and “under contract” is also important.

Baseball contracts are broken all the time. Even Babe Ruth’s was sold by the Red Sox to the Yankees in 1919.

I have no gripe with manager Ryne Sandberg who has very little to work with so it would be unfair to blame him for the train wreck the Phillies have become this year.

But Amaro? Please. He is in so far over his head that it is not measurable.

“Well, let me say this. One of the more difficult things to do in professional sports, and not only baseball but all sports, is to be patient. It’s very difficult. It’s very difficult for the fans to be patient, it’s difficult for the media to be patient, it’s difficult for ownership to be patient. But sometimes when you get challenges, and the challenges are we haven’t played well in the last 2-3 years. These are basically the same people that made the decisions when we won five division championships from 2007 through 2011. These are the same people making the decisions. So, all of a sudden, Ryne wasn’t here, but Ruben was here. All of a sudden he didn’t get dumb overnight. It’s just right now, we’re in a situation where we know where we’re headed and it’s going to take some time to get us where we want to go.”

“Ruben and I mutually agree on most decisions that we make. Ruben is very inclusive on any decisions that we make for the ballclub. But right now if there’s something I might have a different opinion, I’ll certainly voice that opinion and we’ll talk it through and try to make what we think is the correct decision.

“I know it’s hard saying that because we’re at the bottom of the league, the division, but I don’t know that there are too many dominating teams in baseball right now. So consequently, yeah, we have to get younger, we have to get younger players into the lineup. But at the same time, a tweak here or a tweak there might make you a little more competitive . . . I think you can do both. You can make some changes in your ballclub and bring guys along and at the same time be more competitive than we are.”

Gillick didn’t last in MLB till the age of 77 and win World Series titles in two cities — Toronto and Philly — by not knowing how to play the game.

He left himself more loopholes by what he said than the Daily News headline writer, who must not have read the piece, would allow.

So, I think Amaro will go, and it will take a man of Gillick’s street cred to do it.