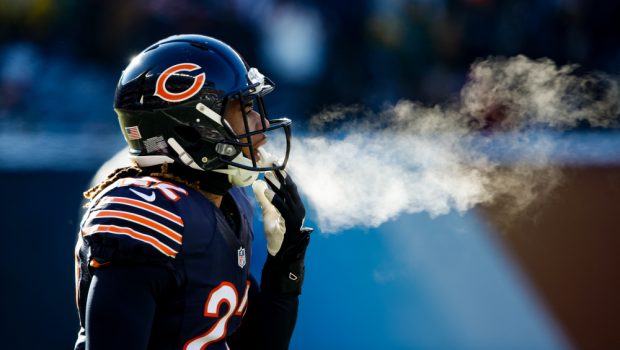 TAKE A BREATH: EAGLES-BEARS MAY BE WILDEST OF WILD CARD GAMES!

When Carson Wentz went down with a torn ACL in 2017, Nick Foles stepped in and led the Eagles to the franchise’s first Super Bowl championship.

This year has a familiar feeling in that sense. Wentz is again injured as the Eagles head into the postseason, and Foles will be responsible for leading their offense in the Wild Card Round.

Foles is 4-1 as the Birds’ starting quarterback this season. He went 1-1 in the first two weeks—while Wentz was still recovering from his ACL tear—and led the Eagles to three straight wins to end the regular season.

And Philly needed all three of those victories. The Eagles clinched their playoff berth when they beat the Washington Redskins and the Minnesota Vikings lost to the Chicago Bears in Week 17.

In three playoff games last year, Foles passed for 971 yards, six touchdowns and one interception. He had 373 passing yards, three passing touchdowns and even a receiving score in Super Bowl LII against the New England Patriots.

If the backup can play at the same level as he did last postseason, the Eagles could be poised to upset the Bears and make another run in the playoffs.

Of course, if Foles plays well against the Bears, the Eagles win and Wentz is ready to return later in the playoffs, it would be interesting to see what Doug Pederson decides to do.

On the other side of this matchup is Bears quarterback Mitchell Trubisky, who will be playing in his first playoff game in the second year of his career.

Trubisky had a solid regular season, passing for 3,223 yards and 24 touchdowns in 14 games. He missed two weeks with a shoulder injury but played the last four matchups of the year.

When the Bears have been successful in the past, they have typically relied on a strong defense. They have an elite defense again this season, but Trubisky has helped the offense be successful as well.

Trubisky may not have his biggest performance against the Eagles, but he also may not need to. If the Bears defense plays up to expectations and can hold down Philadelphia, Trubisky and Chicago’s offense can capitalize when it needs to.

This will be the biggest game of Trubisky’s career to this point, and it will be interesting to see how he fares on this stage.

But Trubisky is entering the matchup with some momentum. Over the last three games of the regular season, he completed 63 of his 83 pass attempts for 644 yards, three touchdowns and no interceptions. Those may not be the flashiest numbers, but Trubisky led all three victories to cap Chicago’s 12-4 season.