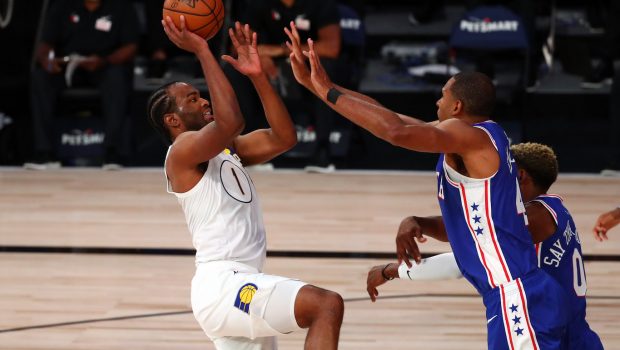 The Sixers lost their first game in the Disney bubble last night to the Indiana Pacers 127-121.

They looked rusty at times, but played well enough in spurts to have had a decent chance to win.

Except for the fact that someone named T. J. Warren exploded for 53 points.

Which makes this another game that was lost because Sixers coach Brett Brown failed to do the job that any good NBA coach would do.

And that is adjust to what is happening on the court.

Warren, a career 15 points-per-game scorer, is a sixth-year player acquired from Phoenix in an offseason trade. He was 20 of 29 from the field and 9 of 12 from 3-point range in his first game with at least 50 points. All four of those shooting numbers were career highs.

The Pacers (40-26) took control of the fifth seed in the Eastern Conference by breaking a tie with the 76ers and winning the season series. Both teams have clinched playoff spots.

Joel Embiid had 41 points and 21 rebounds for the Sixers, who couldn’t hang on after turning a 10-point deficit late in the first half into a 10-point lead early in the fourth quarter. Before the pandemic-forced shutdown, Philly had lost 10 of its past 11 games away from home.

Tobias Harris scored 30 points for the Sixers, and Ben Simmons had 19 points and 13 rebounds.

But the leading trio for the Sixers wasn’t enough to overcome Warren, who matched a franchise record with 19 points in the first quarter.

“Give him credit; he was hot,” Harris said. “But too many times, we guarded him like he wasn’t on fire. We gave him too much space, just not enough credit for his ability to score. He punished us tonight from the beginning of the game on.”

The Pacers got the restart-opening win without two starters. Domantas Sabonis left the bubble with a left foot injury a week ago and is out indefinitely. Malcolm Brogdon, who had recovered from a COVID-19 infection that was announced on June 24, missed the game with a neck injury sustained in final scrimmage game before the restart.

Myles Turner, who scored nine points before fouling out, made his only 3-point attempt to put Indiana up for good at 110-107 with 4:34 remaining.

Harris hit a 3 in the final minute before a long clinching 3 from Warren, the first Indiana player to score at least 50 points in a game in 15 years.

“A guy that hot, you try to get him the ball,” coach Nate McMillan said. “T.J. was as hot as I’ve ever seen him, and I thought our guys did a good job of sacrificing and screening and giving him the ball.”