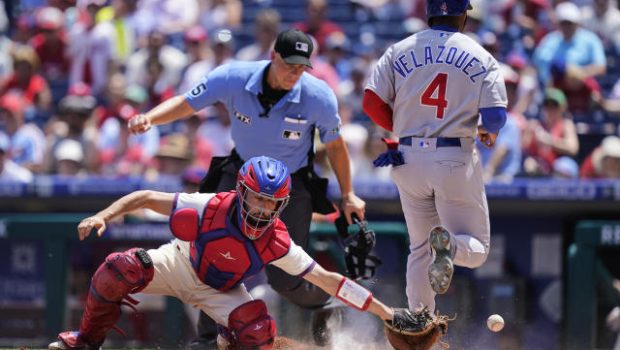 SWEPT AWAY BY CUBS, PHILS NEED HARPER, SEGURA MORE THAN EVER!

Nelson Velázquez also went deep for the Cubs, who have won four in a row to pull within 19 games of .500. It was Chicago’s first three-game sweep in Philadelphia since July 25-27, 2000.

Garrett Stubbs homered for the Phillies, who failed to gain ground in the NL wild-card race against the lowly Cubs. Only the Reds, Athletics and Nationals entered the day with fewer wins than Chicago.

Cubs starter Drew Smyly (3-5) had a perfect game going into the fifth, when Bryson Stott hit a two-out double to left-center that just eluded a dive from center fielder Christopher Morel. Stott scored on Alec Bohm’s single to left.

Smyly allowed one earned run on four hits with four strikeouts and no walks.

Gomes led off the third with the first of his two shots off Bailey Falter (0-3) to give Chicago a 1-0 lead. Morel’s RBI double — his NL rookie-leading 26th extra-base hit — made it 2-0.

In the fourth, Gomes connected for his sixth career multi-homer game with a drive to nearly the same spot in left field. And the Cubs pushed it to 4-0 when Velázquez drove Falter’s 75 mph curveball over the wall in left two batters later.

David Robertson pitched a scoreless ninth for his 14th save in 19 chances. Robertson had to wriggle out of a jam. With runners on first and second and one out, Didi Gregorius popped out to left and then Robertson struck out Stubbs swinging.

Velázquez came off the bench to hit two late home runs in Chicago’s win on Friday night, marking just the second time that’s happened to a Cubs player since at least 1901. The Cubs finished the series with eight home runs, in addition to 25 runs and 33 hits.