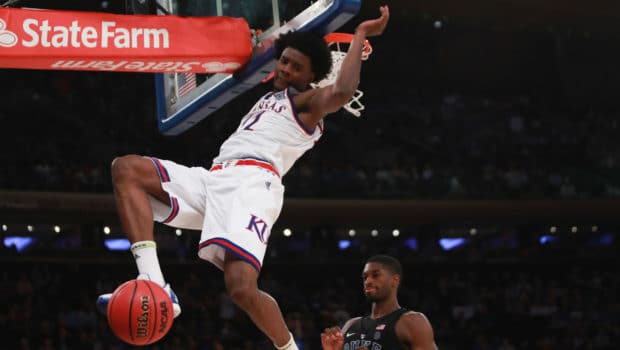 HOW SWEET IT IS! MADNESS REACHES REGIONALS TONIGHT!

The Sweet 16 starts tonight, and here’s a preview of the first four games in March Madness’ favorite weekend:

Why to watch: This figures to be a fascinating test for the top seed. One could call this a contrast in styles, though the Bulldogs have shown they can adapt to a fast or slow pace. The Mountaineers’ constant full-court press, however, isn’t so much about establishing a tempo. WVU does like to generate fast-break points from turnovers, but the long-term objective is to wear down opponents. If the Zags avoid turnovers and shoot well enough to set up their own half-court defense, things could be close throughout.

Why it could disappoint: If the Mountaineers get on a roll quickly, Gonzaga might not have the long-range firepower to mount a comeback. But the game could get away from the West Virginia if the Bulldogs can establish dominance on the boards, particularly on the offensive end resulting in second-chance points.

Why to watch: The term gets overused, especially at this time of year, but there’s an unmistakable “team of destiny” vibe around the Wolverines. It began with their run through the Big Ten tournament, and they’ve now prevailed in an entertaining track meet and a wire-to-wire slugfest in the Big Dance. The journey continues against the Ducks, who’ve shown no less resolve by overcoming the loss of key big man Chris Boucher to reach this point. Both teams have a lot of guys who are making big shots, so it could be another wild ride.

Why it could disappoint: It’s possible that Michigan’s tank will finally hit empty. It could likewise get out of hand for Oregon if they encounter an extended cold spell.

Why to watch: Though the Jayhawks have, more often than not, found ways to win, their games are rarely boring. Though it sometimes takes them until the last 10 minutes to put it all together, they use those closing moments either to rally or put away feisty opposition. The Boilermakers, however, aren’t likely to be put away. They aren’t flashy, but they play fundamental basketball from tip to buzzer, and KU might not have an answer on the inside for Caleb Swannigan.

Why it could disappoint: The Jayhawks’ Frank Mason III can take over a game on his own. If it is KU that gets out to the early lead, Purdue could struggle to come back.

Why to watch: There is, of course, the built-in story line of Wildcats’ coach Sean Miller taking on his former school. That might not interest the casual observer, but what should be of note is both these squads are extremely well-coached. Miller’s young Arizona players have shown improvement through the season, and Musketeers’ coach Chris Mack has done a masterful job keeping things together after the loss of point guard Edmond Sumner. Xavier’s complete dismantling of Florida State in the round of 32, arguably the most surprising result of the tournament’s opening weekend, almost certainly got Arizona’s attention.

Why it could disappoint: One has to wonder, though, how much the Musketeers have left. The Wildcats might be better equipped to exploit their size advantage in the paint.