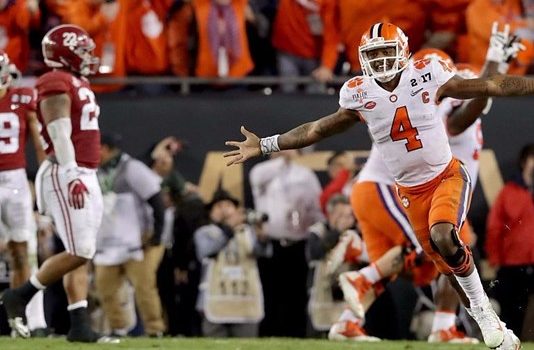 Deshaun Watson proved he was the best player in college football last night, leading Clemson to its first national title since 1981 in a game for the ages.

Three times in the last 14 minutes he led the Tigers on scoring drives, answering every shot mighty Alabama could deliver and then some, until there was one second left and just one more play to make.

Making it even sweeter was that it came at the expense of Alabama, the program by which everyone else has measured themselves for the last decade. Not only did he deny the Crimson Tide a second consecutive title, he kept Nick Saban stuck on five for his career, one fewer than Bear Bryant.

“I wanted to sign my name and end it with an exclamation point,” Watson said. “I think I did that.”

Watson’s career at Clemson has been marked by disappointments:

There was the loss to Alabama in last year’s title game — a game the Tigers thought they’d won, no less. Twice he was a finalist for the Heisman Trophy only to watch someone else pick up the prize.

But after finishing as the runner-up this year, Watson insisted that he didn’t care. There was only one trophy that he was concerned with, and that was the one no one votes on.

Stymied by a ferocious Alabama defense, which got some help from game officials who mysteriously lost their whistles, Watson and the Tigers looked to be running in place for much of the game. Though they had outgained Alabama through three quarters, 359 to 281, and dominated the time of possession, they had only two touchdowns to show for it and trailed 24-14.

But having earned his degree last month after just three years at Clemson, this would be Watson’s last college game. After the final whistle, he declared his intention to enter the NFL draft. And he was going to go out in style.

He opened the fourth quarter with a touchdown pass to Mike Williams. Ten minutes later, he found Williams again for a 26-yard gain that moved Clemson to the Alabama 16 after an unsportsmanlike conduct penalty on Alabama. On the next play, Watson scampered 15 yards, clearing the way for Wayne Gallman’s 1-yard scoring run.

But Alabama hadn’t won 26 games in a row by luck. Facing a fourth-and-1 from their 41, the Crimson Tide converted. Two plays later, Jalen Hurts scored on a 30-yard run to put Alabama up 31-28.

As Watson looked up at the scoreboard, he saw there were still two minutes and one second left.

“I just smiled,” he said. “They left too much time on the clock.”

Gathering the Tigers around him, Watson told his teammates that this was their moment, their chance to leave a mark not just at Clemson but on all of college football. Then he led them down the field, chewing up both yardage and time on the clock until there was just six seconds and two yards left.

With Crimson Tide nemesis Hunter Renfrow backpedaling toward the end zone, Watson lofted a pass that Renfrow hauled in as he crossed the goal line.

In a fitting end, Clemson would recover an onside kick. But there was still one second left, time for one last play.

“What a way to win a national championship, to be able to go out on the field with one second and take a knee. See this guy get one more snap,” coach Dabo Swinney said. “Just special.”

As Clemson partied on the podium after the game, Swinney wrapped Watson in a tight embrace, the gleaming College Football Playoff trophy between them.

“He’s the best player in the country. If anybody doubts that right now, it’s just ridiculous,” Swinney said.

“This was his Heisman tonight,” he added. “This was really what he wanted.”

A performance for the ages, the stuff of which legends are made. 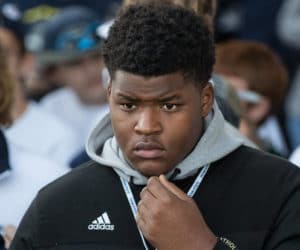 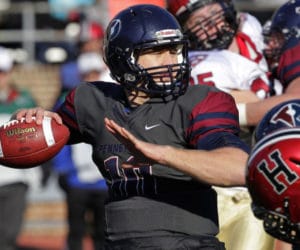 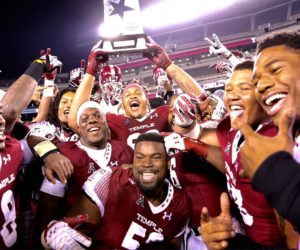