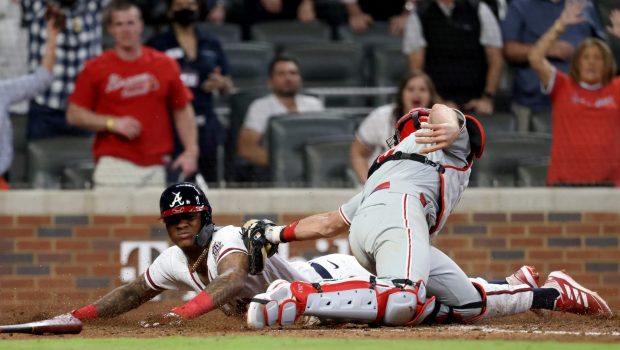 SWEEP CITY: PHILS HAVE TO WIN ALL 3 IN ATLANTA STARTING TONIGHT!

The NL East race lost some drama on Sunday, when the Phillies lost to the Pittsburgh Pirates and dropped 2 1/2 games behind the division-leading Atlanta Braves.

Fortunately for the Phillies, the two begin a three-game series in Atlanta tonight.

A series win would keep them alive, but realistically, the Phillies need a sweep. The Braves end the season with a three-game home series against the New York Mets, and then — if the East hasn’t already been decided — a makeup game at home against the Colorado Rockies on Oct. 4.

The Mets are better than the Marlins (Philadelphia’s final opponent), but the Braves would have to lose two of their final four games to open the door for the Phillies if the Phillies don’t sweep the head-to-head series. It’s also not a given that the Phillies will sweep the Marlins on the road.