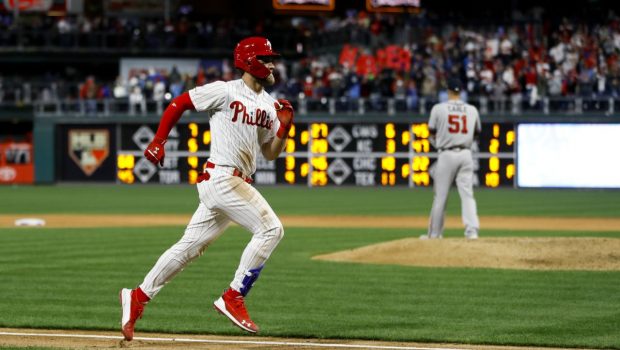 Bryce Harper homered for the second straight game to cap a fantastic debut weekend and the Phillies completed a three-game sweep of the Atlanta Braves with a 5-1 victory.

Harper connected on a solo shot to right field off Shane Carle in the seventh inning that had the crowd resuming its ”MVP!” chants from a day earlier and the Phillie Phanatic dancing atop the dugout. Carle then drilled cleanup hitter Rhys Hoskins on the left shoulder and was ejected from the game, and Phillies fans taunted him with a mock tomahawk chop.

Harper, the hit of the city, is back on familiar turf this week when the Phillies head to Washington for a two-game set with the Nationals.

”I’m sure some cheers, some boos as well,” Harper said.

Harper and his No. 3 jersey became a baseball best-seller. Harper wore Phanatic cleats, bowed to the crowd – and wowed them Saturday with a 465-foot homer for his first hit.

Harper still had Phillies fans in a frenzy, though a windy, chilly night thinned the packed ballpark from the first two games by several thousand for the first night game of the series. Harper walked in the first inning and was left stranded on third when Odubel Herrera struck out with the bases loaded.

Harper lined an opposite-field double off the left field wall in the third and had to hustle with a headfirst slide into second after watching the ball for a bit.

He could have stared all night at his homer.

Phillies fans again made signs at the game seemingly as much a necessary accessory as a hot dog and soda. There was a pack of Phillies fans that brought individual letters and held them up to spell ”Harper.” Another referenced his uniform number with, ”3 Times as Nice with Bryce.”

Harper walked against lefty Max Fried in the fifth to load the bases for Hoskins. Harper was intentionally walked in the season opener to load the bases and Hoskins hit a grand slam. There was no slam this time, just a walk that was enough to score a run for a 2-1 lead. J.T. Realmuto followed with a sacrifice fly for a 3-1 lead in a hitless inning.

Arrieta opened last season as the expected ace but faded late as the Phillies collapsed under the pressure of a pennant race. Arrieta had a 6.82 ERA over his last seven starts and needed offseason surgery on his left knee. Arrieta says he’s healthy, focused and ready to regain the form that made him of the NL’s best pitchers with the Chicago Cubs.

Josh Donaldson, the 2015 AL MVP, singled for his first hit with the Braves in the third and scored on a passed ball.

Andrew McCutchen led off opening day with a homer and he connected again in the third off Braves starter Kyle Wright (0-1) to tie it at 1.

”There are no weak spots in the lineup,” Arrieta said.