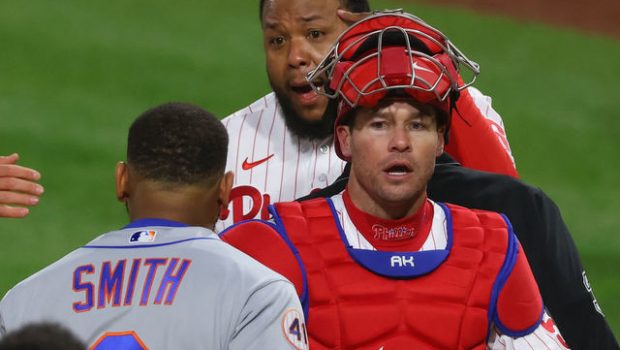 SUSPENDED JOSE ALVARADO APPEALS AND THEN FAILS PHILS IN 8TH!

Alvarado threw just three strikes in an 11-pitch outing hours after appealing MLB’s discipline for his role in a benches-clearing, eighth-inning incident on Friday against New York.

The Phils thought they had rallied to tie the game, 8-8, in the bottom of the ninth by way of a Rhys Hoskins three-run home run. But the call was overturned because the ball hit the outfield railing, which is in play at Citizens Bank Park.

“I mean, it’s a replay. I mean, that’s what the replay system is there for,” Phillies manager Joe Girardi said. “I mean, obviously, it’s frustrating it goes against us, but I’m assuming that they were right. I mean, I’m making the assumption, and you know I’ve said all along — the whole idea is to get calls right. It’s frustrating because we thought we tied it up, and then it’s kind of like, you know, it’s tough.”