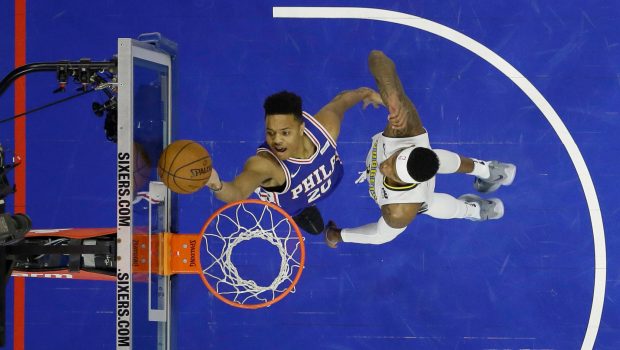 One of the great things about sports in Philly is the element of surprise.

That’s why the Eagles’ Super Bowl championship was all the sweeter.

And why Jason Kelce will go down as the greatest speech-maker since Jefferson and Adams and Franklin.

Let’s add the Sixers’ rookie Markelle Fultz, the No. overall pitck in the 2017 NBA draft.

It had been 154 days since he last appeared in a game, and Fultz was back on the court last night.

Before the game against the Denver Nuggets, Coach Brett Brown announced to reporters that Fultz, who had been out since Oct. 23, would be active for the game and that it had been the player’s decision to come back.

“I get goose bumps telling you all that,” Brown said. “I’m so proud of him.”

Fultz made his entrance with 2:54 remaining in the first quarter to thunderous applause at Wells Fargo Center and chants of “Fultz” — which he later said confused him, as he thought they were chanting for Nick Foles, the quarterback who recently led the Philadelphia Eagles to a win in Super Bowl LII.

After turning the ball over on his first trip up the court, Fultz settled down and scored his first points since October on an easy layup.

It was not all pretty in the first half, as Fultz, who had struggled mightily with his jump shot back in October, came up well short of the rim on an 11-footer that represented his only outside shot of the half. His movement was fluid, without the jerkiness that had plagued him earlier in the season, but the result was the same.

Fultz, who has battled confidence issues, fought through the struggle.

He looked confident running the point and showed a flair for finishing at the rim. And he finally got the jump-shot monkey off his back when he connected on a 14-footer with 2:13 left in the game, prompting fans and players to leap to their feet in support of the 19-year-old. Less than a minute later he added a 20-footer, the longest make of his short NBA career.

“The way that he was welcomed by our city? Spectacular,” Brown said at his postgame news conference. “The way he was embraced by his teammates just reinforces what I think of our group and how close they really are.”

Fultz played 14 minutes in the 123-104 victory. He shot 5 for 13 from the field and finished with 10 points, 8 assists and 4 rebounds. Most important, the 76ers outscored the Nuggets by 16 points when Fultz was on the court.

While he did not seem eager to discuss his injury history or his confidence problems after the game, Fultz showed a sense of humor when asked how he thought the game went.

Fultz was a fantastic shooter in his lone collegiate season at Washington, connecting on 41.3 percent of his 3-point attempts, but he had a brutal start to his rookie season for the 76ers, turning in completely ineffective performances in his first four games. He did not even attempt a 3-pointer — none of his shots were from even 16 feet away from the basket — and he averaged just 6 points a game. He was then sidelined with what the team called a scapular imbalance in his shoulder.

Before the game, 76ers big boss Bryan Colangelo said that Fultz had been cleared medically for some time and that it had been up to him as to when he would try to get back on the court.

“It’s about him being comfortable and him being in the right situation to be in a position to help us and help his teammates out there,” Colangelo said.

He added, “If we didn’t feel this was putting him in the right situation we wouldn’t have him out there.”