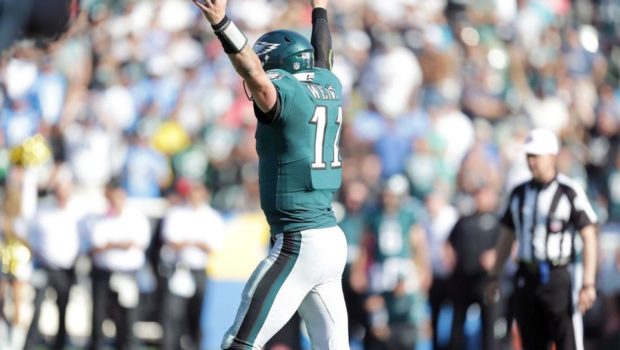 I wrote about Wentz in advance of Philadelphia’s Thursday night game against the Panthers, and he lit up Carolina and Washington in the two ensuing contests. The second-year quarterback went 33-of-55 for 490 yards with seven touchdowns and one interception, good for an 85.3 QBR and a 121.2 passer rating, both of which placed second in the league over that time frame. He also managed to teleport out of a sack against Washington as part of that nationally televised four-touchdown game, which elevated him to(arguably) the top of the MVP leaderboard.

Wentz wasn’t quite as effectiveagainst the 49ers on Sunday. The 2016 second overall pick wasn’t bad by any means, but he threw an ugly interception to set up the 49ers for a (relatively meaningless) touchdown. The interception came on third down, where both Wentz and the Eagles have been lights out this season, but the 49ers — who possessed the league’s worst third-down defense heading into the game — held the Eagles to a 4-for-14 performance on third down. Wentz, who had a passer rating in excess of 130 on third down coming into the game, went 3-for-8 and racked up a passer rating of 9.9 on third downs. He also missed an open Alshon Jeffery for a would-be touchdown, and when he connected with Jeffery for a 52-yard touchdown late in the game, it was on a jump ball where Jeffery did most of the work.

It’s inevitable that Wentz will regress toward the mean on third down, which will take some of the shine off his long drives. He’s still going to be in the discussion for the league’s best quarterback, though, given how effective Wentz has been on first and second downs. Wentz’s numbers dropped off dramatically last season with Lane Johnson out of the lineup, and it remains to be seen whether he’ll suffer some with Halapoulivaati Vaitai replacing Jason Peters at left tackle, but Wentz isn’t leaving this discussion anytime soon barring an injury.