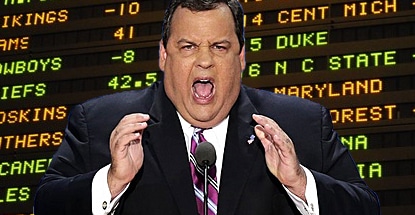 New Jersey Gov. Chris Christie’s approval rating in the Garden Stateis at 15% — the lowest number ever tracked by the Gallup poll!

And today, one of his Hail Mary economic development plans will either live to fight another day or die.

The U.S. Supreme Court is scheduled to announce whether it will hear New Jersey’s years-long effort to allow sports betting at the state’s racetracks and casinos.

Gov. Chris Christie’s administration has fought since 2011 to make betting on sports games legal in an effort to boost the state’s ailing horse-racing and Atlantic City casino industries.

But the NCAA and four professional sports leagues — the NFL, NBA, MLB, and NHL — have sued the state multiple times to stop the plans, saying New Jersey’s bid would violate a federal ban on sports betting in all but four states and hurt the integrity of their leagues’ games.

Federal courts have continuously sided with the leagues. And the U.S. Supreme Court declined to consider an earlier version of the case.

This time, the nation’s highest court will decide whether to hear an appeal of a ruling last August by the U.S. Third Circuit Court of Appeals in Philly. That ruling said New Jersey’s latest attempt — to allow sports wagering without state regulation — doesn’t work because sports betting is “clearly and completely legally prohibited” under federal law.