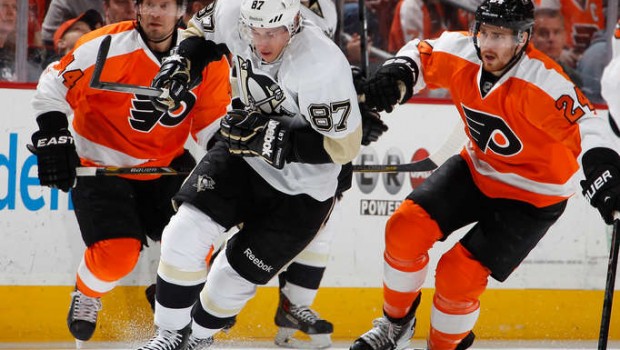 SUPER SID AND PENS WILL BATTLE ELEMENTS AND FLYERS TONIGHT!

Sidney Crosby and his Pittsburgh Penguins have had mixed results playing without a roof, such as tonight’s Stadium Series game at Pitt’s Heinz Field against the Flyers.

In the 2011 Winter Classic at Heinz Field, a 3-2 loss to Washington, Crosby got clocked by a blindside hit by the Capitals’ David Steckel, resulting in a concussion and heavily chronicled complications that forced Crosby to missed 101 games over the next season and a half in the prime of his career.

“I’m looking for a bit better outcome than last time,” Crosby said. “It will be nice just to get out there. Playing outside is something that’s special no matter where it is. To be here at home again and hopefully have a better memory of playing outside — that’s kind of the way I’m looking at it.”

Crosby was the hero in the first Winter Classic, in 2008, when he scored the winning shootout goal for a 2-1 win over Buffalo in a snow globe atmosphere at Ralph Wilson Stadium. He and Pittsburgh had a forgettable time in a March 1, 2014, outdoor Stadium Series game at Soldier Field, won by Chicago 5-1.

Weather was a factor in the 2011 Winter Classic, which was moved from the afternoon to nighttime for weather reasons. Still, there was rain, and temperatures were in the 50s.

Temperatures in Pittsburgh soared into the 60s and 70s this week, but multiple forecasts called for a big dip in the hours leading up to this night game, with a chance of rain or flurries.

“I just hope the weather is good for it,” said Pittsburgh’s Eric Fehr, the NHL’s leading scorer at Heinz Field after he had two goals while playing for Washington in the 2011 game.

“We don’t want to have to put windshield wipers on the visors when we’re playing out there. Things got a little interesting last time we played.”

Crosby labeled the ice “pretty good” on Friday, when both teams practiced on the rink built over the past several days.

Pittsburgh was part of a big buildup for the 2011 game against the rival Capitals, but the Penguins-Flyers rivalry runs even deeper.

The Penguins (37-14-8) are in a heated race for the Metropolitan Division title, while Philadelphia (28-25-7) is clawing to get back into a wildcard spot in the East.

“It’s a cool experience,” Brayden Schenn said. “A lot of families are coming to town. We obviously know there are two points on the line, but it’s a whole difference experience, and it’s pretty cool for us as well.”

Cool, and different, but not an exhibition game.

“At the end of the day, we’re there to get the two points. If it was earlier in the season, we could take in a little bit more. It’s all business now, and for us it’s just finding a way.”