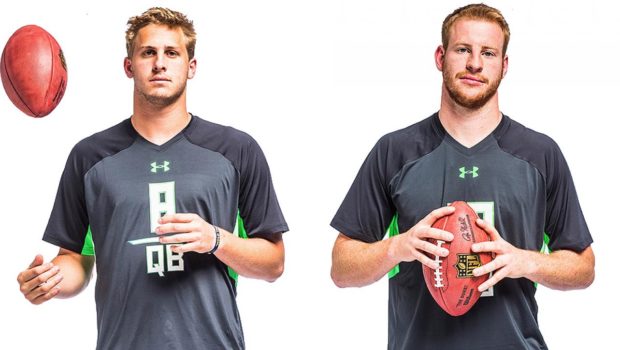 If you’re looking for some insight into next Sunday’s Eagles-Rams shootout at the L. A. Coliseum, check out how the L. A. Times compares the second-year quarterbacks:

The Eagles’ Carson Wentz and the Rams’ Jared Goff:

“The natural instinct of most young guys is they’re going to force the ball to make a play, until they get burned and have some interceptions and make some dumb throws,” said Ted Tollner, who worked with both Goff and Wentz to tune them up for the scouting combine and draft.

“These guys get it. Neither of them look like second-year quarterbacks. Even though they’re playing up-tempo a lot of the time, they don’t seem to get rattled. They have patience.”

Tollner, who worked with them as a consultant for the first four months of 2016, is loving their success but concedes he didn’t expect it to come this quickly.

“You always think it’s going to take a few years to make that transition to real games in the NFL and the speed of it all,” said Tollner, who was head coach at USC from 1983-86 and later worked as an offensive coach with several NFL teams. “Because young players don’t understand the speed. These guys have learned it fast. They’re getting good coaching where they are, and they’ve learned how to do these things rapidly.”

Goff and Wentz both are represented by Irvine-based REP 1 Sports, composed of cousins Bruce and Ryan Tollner — Bruce is Ted’s son — Chase Callahan and Nima Zarrabi. Ted Tollner is a consultant for them, as is former NFL quarterback Ryan Lindley, who also worked with the QBs on a daily basis leading up to the draft.

“The thing that I noticed when they were going through the footwork and the accuracy is that they both could move well,” Tollner said. “You can tell when someone can move their feet, stay in rhythm, and get the ball out of their hand fast. That stuff to me has always been more important than whether they have the perfect three-quarters-delivery release. It’s just getting it out quick, and they could do that.”

“What we’re seeing now is very rewarding, especially when you’ve got guys that want to work,” Tollner said. “It’s not like you have to talk them into it. `Let’s go out and do this now.’ What you’ve got to talk them out of is, `Hey, that’s enough for today. I don’t want you throwing any more today.’ That was more of the issue. They don’t want to stop working, or looking at film when they’re not working out. They’ve got a legitimate work ethic — not one they just talk about.”