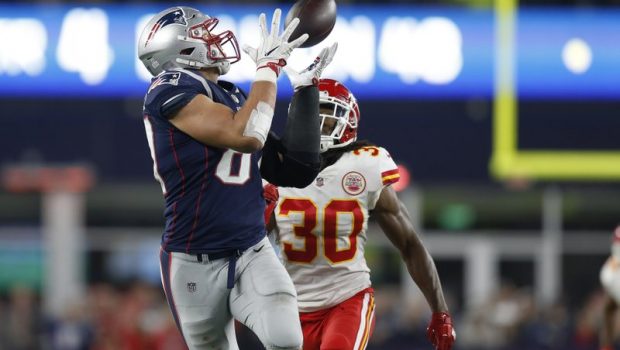 This was the most looked-forward to match-up of this young NFL season.

And it lived up to the hype.

The Patriots amassed 500 total yards and got another clutch performance from quarterback Tom Brady in a 43-40 win.

Brady passed for 340 yards and touchdown while running for another score and helped set up Stephen Gostkowski’s 28-yard, game-winning field goal as New England beat back a frantic second-half rally by the Chiefs.

“I think we have a lot of clutch players,” Brady said. “I think we have no problem grinding it out. That’s what the football season’s all about. I don’t think we’ve seen our best. I think we can play a lot better and I think that’s what we plan to do.”

The Patriots have now won three straight games since starting the season 1-2. And, at least offensively, they seem to be finding a groove following a slow start that included lopsided losses to Jacksonville and Detroit.

It is the first blemish of the season for the Chiefs (5-1) and first loss as a starter for Kansas City’s 23-year-old QB Patrick Mahomes, who started the game slowly before rallying his team from a 15-point, first-half deficit to take a late lead.

He threw a pair of early interceptions , but regained confidence down the stretch leading touchdown drives with the same improbable plays he’s been pulling off all season. He kept quieting a nervous New England crowd.

The Chiefs tied the game at 40 via Mahomes’ 75-yard TD pass to Tyreek Hill. But they left too much time on the clock for Brady, who marched his team down the field to set up the eventual winning kick.

“They had a good game plan,” Mahomes said. “They threw a lot of pressure at us, a lot of different, and I just tried to stay within myself. I missed some throws even when there was pressure that we could have scored on and I feel like as the game went on I just kept making the reads and throwing the ball and I started connecting on the ones later.”

The Chiefs imploded with Alex Smith under center last season, losing six of their final 11 after a 5-0 start. But tight end Travis Kelce said he feels like this team has lots of room to grow and has a different mentality than it did this time last season.

“You got to love the way the team fought,” he said. “It is crappy losing and nobody likes to lose. It is unfortunate that the team that ended up with the ball won. It is something to learn from and you have to start fast.”