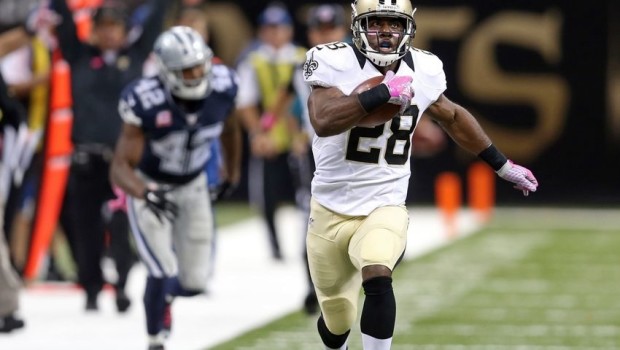 If Eagles fans have a sour taste in their mouths after yesterday’s 23-20 loss to the Redskins — and they should since the Birds were teed up to win! — imagine how fans of the dreaded Dallas Cowboys feel:

The Cowboys are losing players faster than they are losing games these days. And with Sunday night’s 26-20 loss to the previously winless New Orleans Saints on an electrifying 80-yard touchdown pass to C.J. Spiller in overtime (above), the 2-2 Cowboys have given away their early cushion in the NFC East. They now find themselves in a tie for first place with the New York Giants and Washington Redskins. And the Eagles, at 1-3, are onlya game behind!

The meat of the schedule arrives next Sunday in the form of the defending NFL champion New England Patriots. A trip to the Meadowlands follows for a rematch with the suddenly surging Giants, then the defending NFC champion Seattle Seahawks pay a visit. The Cowboys will be the underdog in all three games and could slide into a huge hole in the division by the time Tony Romo and Dez Bryant return around Thanksgiving.

The good news is that an embattled defense will get its best run defender and pass rusher back next week against the Patriots when middle linebacker Rolando McClain and defensive end Greg Hardy return from their NFL suspensions. The Cowboys will need both against Tom Brady, who has carved out a Hall of Fame-caliber career shredding the NFL’s best defenses — much less struggling units such as the Cowboys.

But the bad news is that the best Dallas defender might not be ready for the Patriots. Weakside linebacker Sean Lee left the New Orleans game in the second quarter with a head injury and will now be subject to the NFL’s concussion protocol. He entered Sunday night as the leading tackler (34), leading sacker (one) and leading interceptor (one) on a unit otherwise devoid of playmakers.