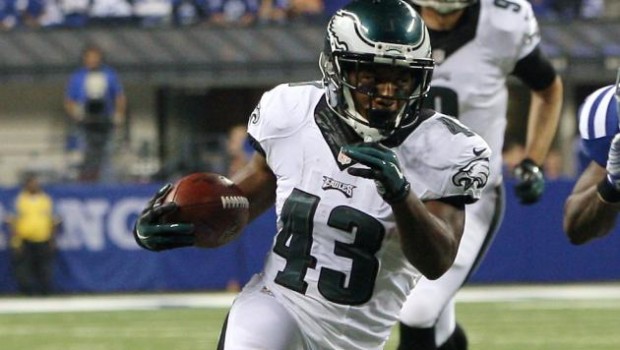 SUNDAY WOULD BE A GOOD TIME FOR EAGLES’ SPROLES TO REEMERGE

So the question on the lips of Eagles Nation three days before the rematch with the Cowboys is:

What in the hell has happened to Darren Sproles?

Sproles burst onto the scene in his early appearances with the Eagles, but as the season heads down the stretch Sproles has become almost a forgotten man.

”There have been times where we intend to get him the ball and we can’t for some reason,” Eagles offensive coordinator Pat Shurmur said.

Sproles averaged 13 touches in the first two games of the season, higher than his average through his nine-year career with San Diego and New Orleans.

But in the last 10 games, one of which he missed with a knee injury, Sproles has a total of 48 touches – 30 carries and 18 catches – for an average of less than five per game.

”You get frustrated, sure,” the soft-spoken Sproles said.

The Eagles have been better when Sproles gets the ball more. In their nine wins this season he averages about 7 1/2 touches; in four losses he has less than three per game.

During the 24-14 loss to Seattle on Sunday he had four carries for no yards and was not thrown a pass.

”We are trying to (get Sproles involved), but I think a lot of times they did some different things,” Eagles coach Chip Kelly said. ”They dropped Earl Thomas down a few times to kind of double him.”

Sproles said defenses are more aware of him.

”Teams are starting to double me more than they were before and that’s frustrating, too,” he said. ”But I’ve seen double teams before. If I’m getting doubled then someone else should be open, right?”

And he needs to be on the field to draw the double coverage.

”It all depends on what’s going on in the game,” Sproles said. ”What the defense is doing and how they’re playing me. We’re seeing some man, we’re seeing a lot of cover 3 to stop our middle stuff.”