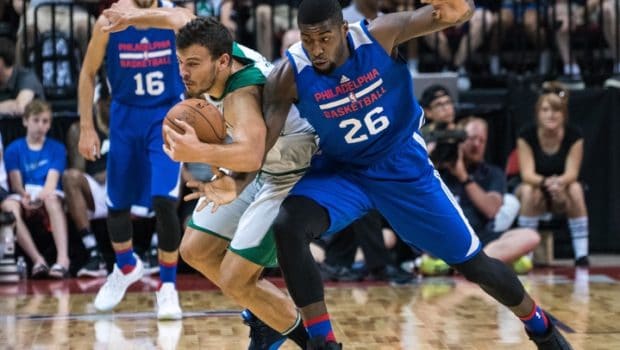 SUMMER SIXERS’ LESSORT AND TLC STAND OUT IN LOSS TO CELTICS!

The 76ers lost last night in the Vegas Summer League to the Boston Celtics, 88-83, but they got a good look at their No. 50 pick in last month’s draft:

Mathias Lessort (above) made his summer league debut, and he rang up 4 points (1-2 fg), 4 rebounds, a steal, and a blocked shot. The 21-year old Frenchman supplied the Sixers with a rugged, physical, active defensive presence, helping create several deflections.

Along with Lessort, Melo Trimble was one of the top performers, according to coach Lloyd Pierce. With minutes to be had in the Sixers’ backcourt, the Maryland product took advantage of an increased role versus Boston, notching 13 points on the strength of a 3 for 5 display from 3-point territory. Trimble had previously appeared in only one summer league game.

After a one-game absence caused by an upper lip laceration sustained in Saturday’s last-second victory over the Golden State Warriors, Timothe Luwawu-Cabarrot returned and brought with him an aggressive attitude. The rising second-year wingman tallied a game-high 16 points (4-13 fg, 3-5 3fg, 5-7 ft), while adding six rebounds and three assists.

Jayson Tatum again delivered key contributions in crunch time. He assisted on a tiebreaking basket with just under two minutes to go in the fourth quarter, and moments later summoned up an impressive length-of-the-floor driving lay-up to stretch the C’s lead to two possessions.