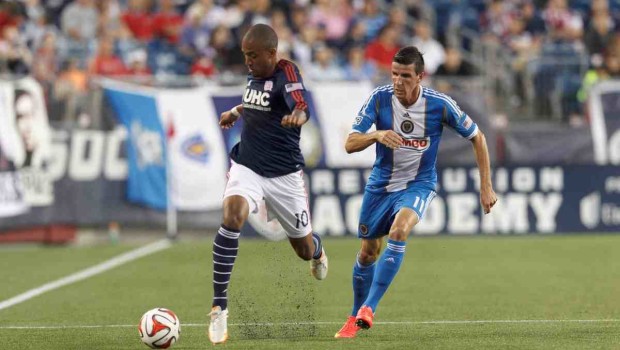 The Jim Curtin era started successfully as the Union gave their new coach a 3-1 victory over the New England Revolution at Gillette Stadium on Saturday.

Sebastien Le Toux (above right) opened the scoring in the first half then capped it in the second, with a golazo from teammate Danny Cruz and Saer Sene’s first of the year for New England filling out the boxscore in between.

Le Toux’s first came when he pounced on a weak back pass from New England’s Jose Goncalves, who headed back toward ‘keeper Brad Knighton under pressure from Cruz. Le Toux was on the spot, beating Knighton to the ball and catching New England completely off guard in the 42nd minute.

Philly cushioned its lead in the second half when Michael Lahoud fed Cruz after clearing a corner, setting up the veteran winger to dribble 60 yards before unleashing a blast from the top of the box that eluded the outstretched Knighton.

Named the Union’s interim manager after John Hackworth was fired on June 10, Curtin’s decision to flip the roles of Amobi Okugo, who moved up to the holding-mid slot, and Maurice Edu, who dropped to center back, paid off as both players adjusted nicely with the aid of Zac MacMath (five saves) behind them.

The Union are suddenly surging, having gone 5-2-1 across all competitions in their last eight, while the Revs have now dropped three straight multi-goal decisions to conference rivals. Both teams return to action in road games on July 4th with the Union visiting FC Dallas and the Revolution squaring up with Real Salt Lake.

With the victory Philadelphia takes the season series 2-0-1, but the clubs will meet again on July 8th in the quarterfinals of the US Open Cup.