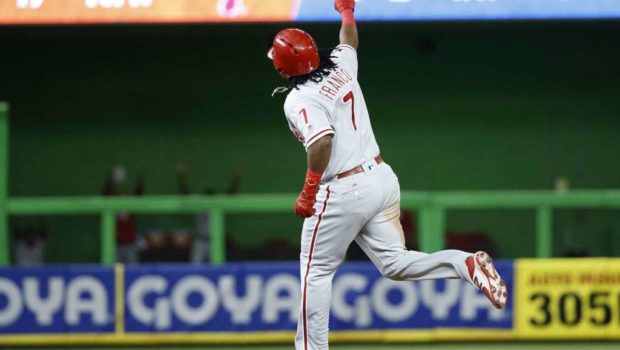 Maikel Franco had three hits, including a tie-breaking home run in the eighth inning, to help lift the Phillies past the Marlins 5-2.

“The three hits, the home run, he had a different approach in batting practice, which was obvious to me,” Phillies manager Pete Mackanin said. “He really concentrated on staying above the ball and leveling off his swing and it paid off in that game.”

National League home run leader Giancarlo Stanton hit his 29th for the Marlins, who have lost four of five and had just five hits.

Franco’s homer to left field off Dustin McGowan (5-1) was his 14th of the season and it broke a 2-all tie.

Nick Williams added a two-run homer in the ninth to cap the scoring.

“I wasn’t happy about that,” Mackanin joked. “I like the tension with a one-run lead. But, no, it was great to see especially against a left-hander. Great to see. He stayed on the ball, it was up in the zone and he crushed it.”

Cameron Perkins drove in two runs for the Phillies and Pat Neshek (3-2) pitched a scoreless seventh for the victory.

Joaquin Benoit tossed the eighth and Hector Neris pitched a perfect ninth for his ninth save in 12 opportunities.

“The bullpen did a great job, all three of them,” Mackanin said. “That was one of the easiest save that Neris has shown us this year, which was nice to see.”

It was the fifth time this season Franco has recorded at least three hits. He is 9 for 21 (.429) in his last five games since the All-Star Break.

Vince Velasquez made his first start since May 30, also against the Marlins, due to a right elbow flexor strain. Velasquez allowed two runs, one earned, and four hits in six innings. He struck out four and walked one.

“I felt really good,” Velasquez said. “From the get-go pretty much pitching to contact trying to get early outs. The last time, trying to get over that hump, having the injury and it’s kind of tough mentally, but you’ve got to lock in and have that right mindset and attack hitters.”