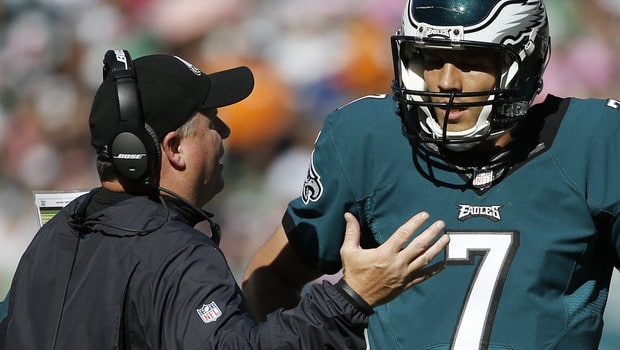 SUDDENLY, EAGLE SAM BRADFORD IS THE TOAST OF THIS TOWN!

No one, with the possible exception of owner Jeff Lurie, was happier about Sam Bradford’s terrific performance last night against the Dallas Cowboys than the Birds’ QB.

But then, just as quickly as he threw two devastating interceptions against the New Orleans Saints on Oct. 11, Bradford tied last night’s game with a four-play, 81-yard drive that culminated in a 41-yard touchdown pass.

There was a halftime lead after a field goal. And on Philly’s first possession of the third quarter, Bradford led another 80-yard touchdown drive, then capitalized on a turnover to throw another TD and take what would end up being an insurmountable lead over the lowly New Orleans Saints.

Now, no one really knows what was actually going through Chip Kelly’s mind a month ago during the New Orleans game. It literally could have been anything. Maybe he was going to be stubborn and stick with the quarterback he hand-picked to build his team around.

Maybe he was thinking about temporarily pulling Bradford from the game and replacing him with Mark Sanchez, but keeping Bradford as the starter (an unconventional move, but Kelly is unconventional and this is the sort of logical, but rarely-done, idea that the milquetoast NFL is too afraid to try).

But it’s not a stretch to assume that Bradford was on a seat that was growing hotter by the possession. Now, with his first excellent stretch of football this year, a decent run of games coming up — Giants, @Panthers, @Cowboys, Dolphins, Bucs, @Lions — and the Eagles playing in a division where literally anything could happen, Bradford seems to be firmly ensconced as the starting quarterback of the Eagles.

For the next six days, at least.