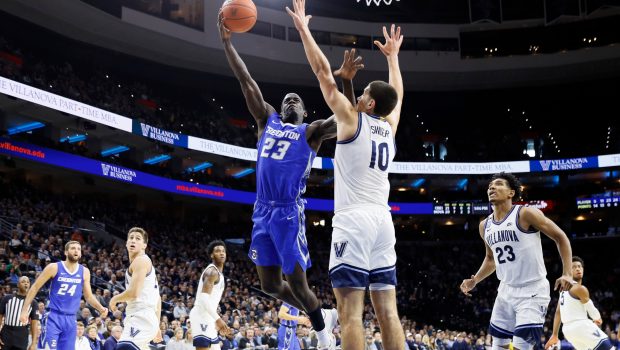 Creighton just accomplished what no other Big East team had done in almost two seasons:

Beat the Cats on their home floor.

It was Villanova’s first home loss in the Big East since St. John’s defeated the Wildcats on Feb. 7, 2018, snapping a 16-game home conference winning streak.

“I’m really proud of my team,” Creighton coach Greg McDermott said. “There’s nobody we respect more than Villanova. It’s a heck of a win for our program because of how good Villanova is.”

“Creighton deserves a lot of credit,” Wildcats coach Jay Wright said. “They came in here and played a better basketball game. We weren’t that bad; they just played a better all-around game. They did a great job defensively, hit big shots and handled our pressure.”

Villanova trailed by as many as 17 points in the opening half and slowly cut into Creighton’s 12-point halftime lead. The Wildcats got within three, 46-43, on Moore’s 3-pointer with 12:06 to play and again on Gillespie’s layup with 10:22 left that made it 51-48.

But the Wildcats wouldn’t get any closer.

“Our guys locked in and got to some shooters,” McDermott said. “We’ve made some good strides defensively. If you’re going to win on the road in this league, your defense is going to have to travel.”

Creighton kept the Wildcats at arm’s length and had a 58-50 advantage with 7:36 remaining on Kelvin Jones’ short turnaround jumper. Then, Ballock, a 45.1 percent 3-point shooter entering, drained a long 3 before assisting Mahoney on a 2-on-1 break to make it 63-50 with 6:05 left.

But Ballock nailed a huge 3 from the left corner on a play out of a timeout, putting Creighton up 66-57 with 3:25 remaining.

McDermott called the play knowing that the inbound pass would get to the left-handed shooting Ballock and that it would be tough for Villanova to contest the jumper from that spot.

Ballock did the rest.

“It’s a hard shot to defend, but it’s a very difficult shot (to make),” he said.

And Damien Jefferson then scored six straight points, capped with a one-handed dunk that made it 72-59 and put an exclamation point on the win.

“Over the past few games, we’ve been doing a better job as a whole,” Mahoney said.