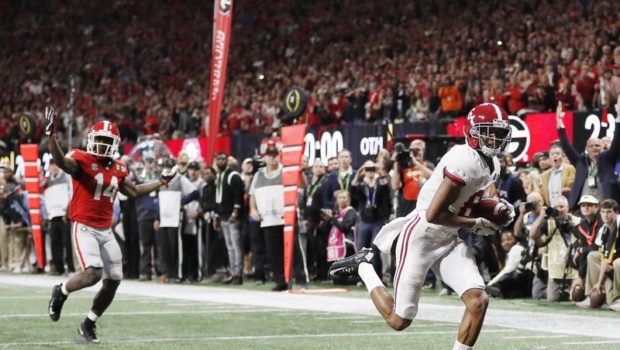 For 30 minutes last night, a dominant first half in which the Georgia Bulldogs dismantled the Alabama Crimson Tide with a bruising defensive effort, the student seemed ready to overtake the teacher.

But as Alabama returned to the field for the third quarter, Nick Saban sent an resounding message to Georgia coach Kirby Smart that carried across the sideline at Atlanta’s Mercedes-Benz Stadium:

The old master won’t relinquish his post quite yet.

In a surprise move, Saban replaced struggling quarterback Jalen Hurts with backup Tua Tagovailoa, a true freshman from Hawaii who last appeared against an FBS opponent in October.

The unorthodox decision brought the Crimson Tide back from the abyss, reminding Georgia that the imitator rarely beats the original.

Alabama won its fifth national championship in the past nine years, a 26-23 overtime thriller that featured a furious second-half comeback, a devastating missed field goal and an instant-classic ending.

After kicker Andy Pappanastos shanked a 36-yard kick at the end of regulation—a stunning miscue that gave Georgia life after it relinquished a 13-0 halftime advantage—the Crimson Tide survived. The Bulldogs opened the extra frame with a 51-yard field goal to regain the lead and then sacked Tagovailoa for a 16-yard loss, a play that put Georgia on the verge of its first title since 1980.

Then Tagovailoa unleashed a 41-yard bomb to DeVonta Smith for the game-ending touchdown.

“We needed a spark on offense,” Saban said afterward. “I thought Tua would give us a better chance and a spark, which he certainly did.”

The victory re-established the Crimson Tide’s position atop the sport following last season’s heartbreaking loss to Clemson and cemented Saban’s status as perhaps the greatest coach in college football history. Saban earned the sixth title of his career—and his fifth with Alabama—tying the legendary Bear Bryant’s record.

This one proved particularly satisfying, because Saban defeated a team designed at its core to disrupt the Crimson Tide’s seemingly unending stretch of dominance.

Smart, the second-year head coach, served on Saban’s staff with LSU, the NFL’s Miami Dolphins and then Alabama. The Bulldogs hired Smart in large part because they believed he could bring Saban’s magic with him on the 275-mile trip across Interstate 20 from Tuscaloosa to Athens. He did just that, quickly transforming Georgia, like Alabama, into a run-first, defensive-minded powerhouse.

The Bulldogs, however, couldn’t deliver the knockout blow when they needed it most, allowing the Crimson Tide to rebound with Tagovailoa at the helm. With Alabama facing a do-or-die fourth and 4 with 3:49 remaining in regulation, trailing by seven, Tagovailoa delivered a miracle, connecting with Calvin Ridley on a game-tying, seven-yard touchdown pass.

“We just all knew,” Ridley said. “We all knew that he could go in there if one day Jalen went down, and we wouldn’t lose anything.”

Saban knew, too, and he said that he planned going into the game to consider turning to Tagovailoa if Alabama’s offense faltered. With Georgia smothering the Crimson Tide’s running attack, something needed to change.

So at halftime, Saban gathered the offense together and made what Hurts described as “an executive decision” and benched his quarterback of the last two seasons.

“As a competitor, of course you want to stay in there,” said Hurts, who completed just three of eight passes for 21 yards. “But as a team player and as a leader, you’ve got to do what’s best for the team.”

Based on how the game ended, it almost seems hard to believe that throughout the first half, Georgia looked totally in command, thriving by doing what Alabama does best—only better. The Bulldogs bamboozled the Crimson Tide, controlling the ball for more than 19 minutes. Plagued by a string of uncharacteristic mistakes, including a false start penalty that negated a field goal, the Crimson Tide managed just 94 yards of offense before retreating to the locker room to regroup.

Alabama did just that, opening up its offense and letting Tagovailoa throw the ball down the field with abandon. On his second drive, Tagovailoa, who went to the same high school as Tennessee Titans quarterback Marcus Mariota, found Henry Ruggs III for six-yard touchdown pass that cut the deficit to six.

Though Georgia answered with a touchdown of its own, Alabama bounced back, keeping the Bulldogs off the scoreboard for roughly the final 21 minutes of regulation. Tagovailoa completed 14 of his 24 passes, finishing with 166 yards and three touchdowns. Smart said in his postgame news conference that Georgia “talked long” in the week leading up to Monday about the possibility of Tagovailoa playing.

“We told everybody at halftime there was no question they were going to him because they were struggling and they needed some momentum,” Smart said “He provided them some juice, got them some momentum, got the momentum swung back their way.”

Tagovailoa provided a fitting conclusion to a strange season for Alabama, one where it failed to qualify for the Southeastern Conference championship game, but nonetheless sneaked into the College Football Playoff.

Not everybody agreed with Alabama’s inclusion, particularly Ohio State, the first school left out. The same goes for Central Florida, who declared itself national champions and held a parade after finishing the season as the country’s only undefeated team.

Nobody can argue now, even though the sleight didn’t escape Alabama’s players. After the game, running back Damien Harris walked through a joyous Crimson Tide locker room shouting, “They said we weren’t supposed to be here, and we won all of this!”

Tagovailoa made sure of that, with the overtime heave that will immediately enter the annals of Alabama football lore.

“Smitty was wide open, so I hit him,” Tagovailoa said. “And here we are now.”