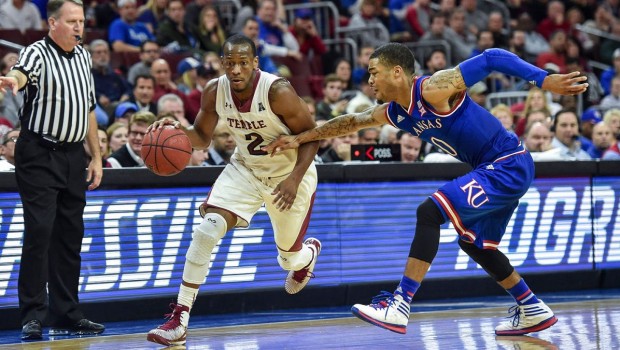 Yes, it is only December. And the game didn’t count in the All American Conference standings.

But Temple’s stunning 77-52 blowout of nationally ranked Kansas at the Wells Fargo Center and before a national TV audience sent Owls fans streaming onto the court (left) and sent a message to the nation that Temple is for real.

Led by 19 points from Will Cummings (photo above) and 18 from Quenton DeCosey, the Owls snapped the Jayhawks’ eight-game winning streak.

Jesse Morgan added 17 points and keyed a dominant second-half performance from the Owls, who were swallowed up after the game by a sea of Temple fans rushing the court.

“I think we played about as well as we possibly could have,” Temple coach Dunphy told the AP. “It was our night.”

Frank Mason III scored 20 points for Kansas (9-2), which shot 32.1 percent from the field and committed 17 turnovers.

No one else on the Jayhawks hit double figures, and leading scorer Perry Ellis was held to five points on 1-for-10 shooting.

“We played tired,” Kansas coach Bill Self said. “And we played like we were a half-step slow or even a full step slow in my eyes.”

The win marked Temple’s first over Kansas since 1995 but continued an impressive streak for the Owls under Dunphy. Temple has beaten a Top 25 team in each of the last eight seasons, and has knocked off a top-10 team in six of the last seven seasons.

Temple’s last win over a top-10 team came against Syracuse at Madison Square Garden — two years ago to the day. Three seasons ago, when Cummings was as freshman, the Owls stunned Duke at the Wells Fargo Center.

“I really wanted it to happen again,” Cummings said. “I didn’t think the fans would rush the court again. It’s a great feeling for our fans to celebrate with us. It was a great crowd tonight and we just wanted to give them something to celebrate.”

The Owls (8-4), who have won four of their last five, shot a blistering 58.3 percent from the field, including 69.2 percent in the second half.

Plagued by turnovers and poor shot selection, the Jayhawks never led. They cut a 10-point deficit to six after halftime, but the Owls went on a 26-9 run to build a 61-38 lead midway through the second half.

The spurt was capped by back-to-back 3-pointers and a three-point play from Morgan, who made his second appearance for the Owls after transferring from UMass and sitting out the first semester due to NCAA eligibility rules.

The Owls have won two straight and outscored their opponents by an average of 22.5 points since Morgan and fellow transfer Devin Coleman (Clemson) made their Temple debuts.

Coleman added five points and hit a reverse layup to put Temple ahead by 25 with 7 minutes left.

“Those two guys are great scorers,” Cummings said. “You can put the ball in their hands and trust them. That takes a lot of weight off my shoulders.”

After the game, Self said he was “very impressed” watching Temple’s guards drive through the lane almost at will and make a flurry of very tough baskets. But the Kansas coach was mostly disappointed his team couldn’t combat that by executing its own offense.

Kansas struggled right from the opening tip, missing nine of its first 10 shots to fall behind 12-2 about 7 minutes into the game. Things didn’t get much better for the Jayhawks the rest of the first half, either.

After a few Temple played jumped on the floor to corral a loose ball, Texas transfer Jaylen Bond electrified the crowd with a one-handed slam that put the Owls ahead 22-10 with 9:46 left.

The Owls led by as many as 14 before two 3-pointers by Mason in the final minute cut Temple’s lead to 35-25 at halftime.

“They were so much better than us,” Self said. “It wouldn’t have mattered how much energy we had. They were far superior tonight.”