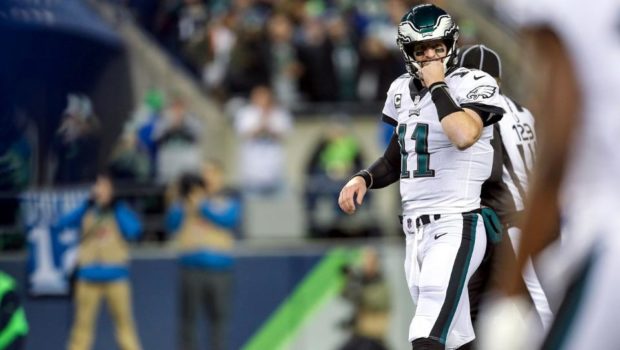 STRETCH DRIVE: CAN EAGLES REGAIN THE HUNGER AGAINST THE RAMS?

With the Eagles’ nine-game winning streak snapped by a hungrier more motivated Seattle Seahawk squad 24-10, all is not lost for season.

Now holding a 10-2 record, the Birds had some wiggle room to lose a game as the stretch drive for NFL playoff seeding begins this this month.

The galling aspect of this loss was the perceived lack of a killer instinct the team displayed all through the nine-game winning streak.

The Hawks’ secondary appeared ripe for attacking, but the passing game was not aggressive to start the game. Most fans griped they didn’t go after cast-off Byron Maxwell early and often, but played more conservative offensively until they were down and had to pass.

Two glaring miscues kept the Birds from staying close to the Seahawks:

Alshon Jeffery’s terrible holding call on the goal line, and Wentz’s fumble on the two yard line — that’s a possible 11 points the Eagles left out on the field, but those plays decide who wins, and who loses.

The defeat in Seattle is not the end of the world, but it’s a reminder to this Eagles team that everything has to be earned, they need to tighten things up for the stretch run as every game has playoff ramifications.

The Birds are practicing in California for their Sunday battle with the 9-3 LA Rams at the Los Angeles Memorial Coliseum, 4:25 pm /Fox.

0 thoughts on “STRETCH DRIVE: CAN EAGLES REGAIN THE HUNGER AGAINST THE RAMS?”