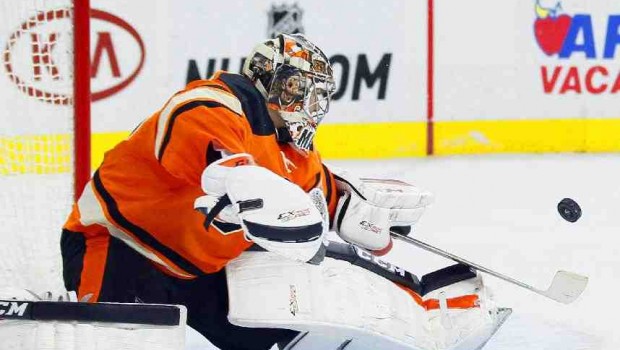 STREAKING FLYERS WIN 4TH STRAIGHT, 9 PTS. OUT OF THE PLAYOFFS

Don’t look now but the Flyers are starting to resemble their nickname and they have won four straight and crawled to within 9 points of a playoff spot.

Flyers goaltender Steve Mason (photo above) needed every one of his 30 saves in a 1-0 victory Saturday night over the Toronto Maple Leafs..

It was the 25th shutout of Mason’s career, and came with NHL record-holder Martin Brodeur watching from the press box in his new role as adviser to the general manager of the St. Louis Blues.

After his 2008-09 rookie season in which Mason had a league-leading 10 shutouts, he certainly was on a solid course.

Mason best save came with 5:15 remaining in the third period when Maple Leafs defenseman Morgan Rielly skated out from behind the Flyers net and had an open look from in front. Mason lunged forward and got a piece of the shot with his right shoulder and sent it into the netting above the glass.

“That [top of the net was] pretty much all he had,” Mason said. “He didn’t do a tight wrap so he coasted out. I was trying to make myself as big as possible and I was able to get a shoulder on it.”

“The guys did work hard,” Maple Leafs interim coach Peter Horachek said. “We got some shots and chances. I think that to find your way out of this situation we’re going to have to spend more time, get more people at the net. We’re still trying to look for plays and there’s times where we need to create more traffic, more chaos in the blue area, more rebound goals. So we’re going to have to spend more time driving to the net. They’re tough to buy right now.”

Flyers defenseman Michael Del Zotto scored at 4:05 of the first period. Forward Petr Straka entered the Maple Leafs zone and centered to a pinching Del Zotto, who fought off the backchecking Daniel Winnik to lift a shot that beat Reimer to the far side, past his glove.

The goal extended Del Zotto’s career-long point streak to six games; he has three goals and four assists in that span.

Flyers’ forward Wayne Simmonds drew an assist on the goal to extend his point streak to three games. Simmonds and teammate Jakub Voracek each played in their 500th NHL game Saturday.

Del Zotto’s goal was the only significant offense the Flyers had. After getting nine shots in the first period they had nine in the final two periods.

“It was the vibe I was getting almost right from the start, like one goal would have to be enough,” Mason said. “And that’s what it turned out to be. For a goaltender, you have to focus on the next shot and not look at the big picture. If you do that you’ll probably make a mistake, just thinking about too much. For myself it was to make the next save.”

With 3:25 remaining in the first period, Mason kicked out his right pad to stop a Winnik deflection of a Jake Gardiner shot, and with 1:54 remaining he lunged forward to deny an open Nazem Kadri from the slot with his right arm and chest.