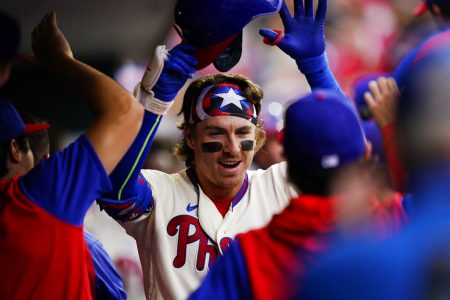 STOTT’S RISE, DIDI’S FALL SHOWS HOW PHILS HAVE IMPROVED OVER ’21!

Didi Gregorius said good-bye to the Phils, and Bryson Stott’s arrival was one of the reason.

Stott cracked the Opening Day Roster and seemed to be in a bit of a competition for infield playing time next to second baseman Jean Segura.

With both Gregorious and third baseman Alec Bohm having down years in 2021, Stott was given time at various infield positions to start the year.

However, he struggled out of the gate, getting optioned back to the minors April 25. At that time, he was hitting just .133/.161/.167. Those struggles seemed to give Gregorious and Bohm more time to get back on track.

In May, Stott was recalled, which was followed a few weeks later by Segura fracturing his finger, opening up the infield for all three of Stott, Gregorius and Bohm.

In that time, Stott and Bohm have improved after sluggish starts while Didi simply has not.

Gregorius is making $15.25M this year as part of that two-year deal he signed, leaving around $5MM left to be paid out. Any team that signs him at that point would only have to pay him the prorated league minimum with the Phillies on the hook for the remainder.