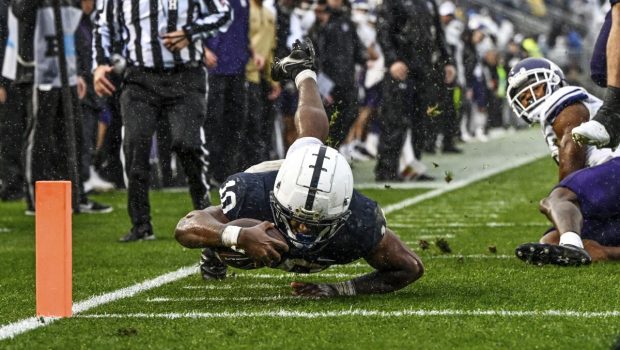 Call this the storm before the storm.

Penn State struggled in the rain yesterday at State College to beat Northwestern 17-10.

But the next storm arrives in Ann Arbor on Oct 15 against Michigan.

Penn State’s defensive captain PJ Mustipher stuffed Northwestern quarterback Ryan Hilinski at the goal line early in the fourth quarter to snuff out the Wildcats’ second-half momentum, and Penn State scored 14 points off three Northwestern turnovers to overcome five of its own giveaways.

“It was a grimy game,” Mustipher said. “We executed our defense, made the plays we were supposed to and that’s about it.”

Nick Singleton had 21 carries for 87 yards and a touchdown, Sean Clifford completed 10 of 20 passes for 140 yards with a touchdown and Kaytron Allen added 86 rushing yards on 21 carries to help Penn State (5-0, 2-0 Big Ten) stay unbeaten heading into an off week where they’ll have plenty to clean up.

Both teams struggled early, combining for six turnovers in the first half.

Northwestern gained just 13 yards in the first quarter and gave the ball back when Ji’Ayir Brown intercepted Ryan Hilinski and returned it to midfield.

Clifford led a quick five-play drive from there, and found tight end Brenton Strange open in the flat. Strange leapt over a defender at the goal line to make it 7-0 late in the first.

Hilinski didn’t complete his first pass until 10 minutes before halftime. Shortly afterward, a bad snap bounced at his feet and Penn State defensive end Nick Tarburton hopped on it.

The Nittany Lions turned that giveaway into points, too, when Singleton plowed in from two yards out seven plays later.

Singleton’s up and down day continued, with the freshman fumbling again Penn State’s next possession when Rod Heard drilled him behind the line of scrimmage. Cameron Mitchell recovered for the Wildcats. But they couldn’t block Tarburton.

The Nittany Lions held the Wildcats to just 31 rushing yards. Northwestern running back Evan Hull, who entered leading the country in yards from scrimmage, finished with 96.