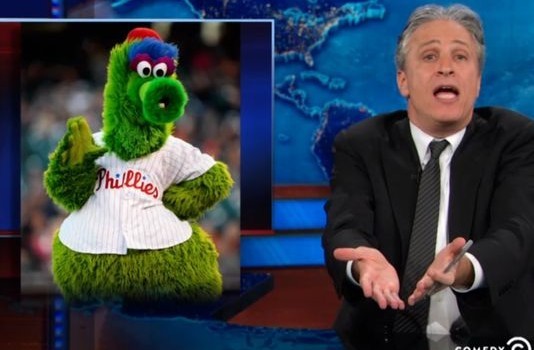 Jon Stewart’s rant against Philly on Tuesday night’s “Daily Show” on Comedy Central went viral, and by Wednesday he was in a contrite mood.

Kicking off the show acknowledging that he “hurt some people I care about very much” in reference to the anti-Philly bit, Stewart then issued an apology to the one and only Phillie Phanatic, who he knows as “Phillip E. Phanatic.”

Stewart went on an anti-Philadelphia rant Tuesday during a segment about how Philadelphia Phillies manager Ryne Sandberg came down with food poisoning from a Shake Shack hamburger bought at Citi Field, home of the New York Mets.

As a lifelong Mets fan, Stewart took the opportunity to roast Philly. And it was so brutally over the top that even proud Philadelphians, who Stewart called “Liberty Bell-worshiping f–ks,” had to laugh.

One of the first targets was cheesesteaks and “Rocky”:

“What kind of city takes parts of the cow that normal people throw away, fries it up on a hunk of bread and before they can call it their signature dish, asks, ‘Do you want me to put Whiz on that?’ I’ll tell you: A city so f–king dumb that it uses its art museum as exercise equipment.”

Then it was time for the Phantic to take his lumps:

“It’s a city so famously sh–ty, no animal would represent its baseball team, forcing you to go with this f–ked up Jim Henson reject lookin’ piece of s–t.”

And to round out the attack, Philadelphia Cream Cheese got the Don Rickles treatment:

“What city is so insecure it has to put its name on cream cheese? Cream cheese: A dish that makes itself if you leave milk out.”

Last night, Stewart opened “The Daily Show” by trying to atone for his sins and said he was sorry.

“Off the top, last night I may have inadvertently made some derogatory remarks towards Philadelphia Phillies manager Ryne Sanberg and the entire city of Philadelphia. And while a city that famously booed and threw snowballs at Santa Claus may deserve some shade, I hurt some people I care about very much, including one Phillip E. Phantic. Phillie, they call him.

“Obviously there is no reason to rehash who called who a ‘f–ked up Jim Henson reject looking piece of s–t.’ The point is it was said — most likely by the one of us who doesn’t have a blow tickler in place of a functioning larynx.”