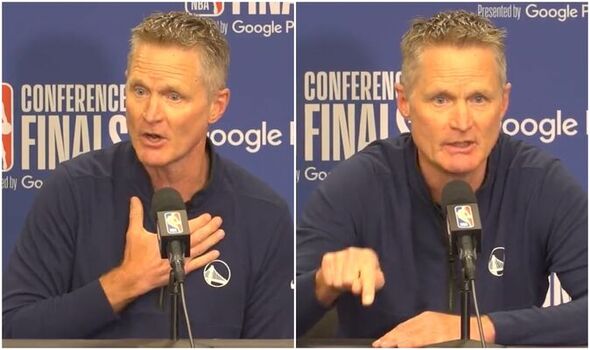 “When are we going to do something? I’m tired,” Kerr yelled in his pregame availability before Game 4 of the Western Conference finals.

His voice quivered and cracked at times, but he looked firmly into the cameras some 30 feet away with an impassioned plea.

“Since we left shootaround, 14 children were killed 400 miles from here, and a teacher. In the last 10 days, we’ve had elderly Black people killed in a supermarket in Buffalo, we’ve had Asian churchgoers killed in Southern California, now we have children murdered at school.”

By the time Kerr addressed the media, the number rose to 19 students and two adults in Uvalde, which is more than 300 miles away from Dallas, closer to San Antonio.

Kerr’s father, Malcolm, was assassinated in Beirut in 1984, when Steve was in college at Arizona — so the issue hits close to home for the Warriors coach.

HERE’S HARPER SNAPPING ON PADS SNELL, WHO BROKE HIS THUMB!