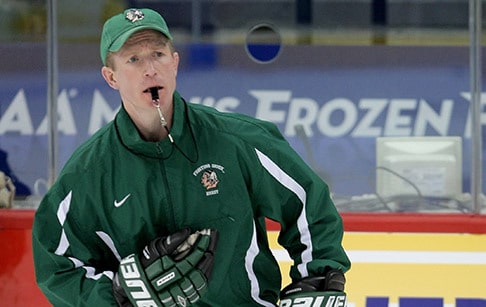 Flyer forward Wayne Simmonds has the best and most consistent opinion of new coach Dave Hakstol, hired from the University of North Dakota in May.

“Stern but fair,” he told NHL.com. “He expects a lot, he demands a lot from his players. At the same time, he seems like a very fair person.”

That’s the read most of the players have gotten through their own research or in brief conversations with Hakstol leading up to training camp, which starts Thursday with physicals and testing and moves onto the ice Friday.

Hakstol is the third coach hired directly from the NCAA ranks with no previous NHL playing or coaching experience.

However, the players don’t view that lack of top-level professional experience as a detriment; rather, they see it as a fresh approach that will help them attempt to return to the Stanley Cup Playoffs after they finished 14 points behind the Pittsburgh Penguins for the second wild card from the Eastern Conference last season.

It certainly helps that Hakstol has a track record of winning. In 11 seasons as coach at North Dakota, the team reached the Frozen Four seven times, and Hakstol’s program sent 20 players to the NHL, among them Chicago Blackhawks captain Jonathan Toews, Washington Capitals forward T.J. Oshie and Flyers forward Chris VandeVelde.

“Hockey is still hockey,” Flyers captain Claude Giroux said. “There’s a reason why he got the job. Because he knows his stuff. He’s going to bring a different view to the game. He’s coming from college, and it’s going to be fun to see what he thinks of the game, how he wants to play it. I’m really excited to sit down with him.”

Hakstol hasn’t discussed how the forward lines and defense pairs will look starting Friday, and the players are prepared for some experimenting. That could mean more moving around for forward Brayden Schenn. A natural center, he’s played all three forward positions during his five seasons with the Flyers. Last season, his best hockey might have come when he was moved to right wing on a line with center Sean Couturier and left wing Matt Read; he had four goals and four assists in the final six games of the regular season.

“Wherever they place me, wherever they put me, I’ll try to be as comfortable as possible and make the most of the opportunity,” Schenn said. “I’ve said it all along, I’ve played center my whole life, last year was more on the wing. I enjoy playing the right wing, but if it’s left wing, you’ve got to make the most of any situation you’re put in. Can’t really be worrying about what position or where I’m going to be. … We’ll see how we start Friday, but that’s not saying if I start there that I’ll finish there.”

Most of the players have talked at different lengths with Hakstol during the past few weeks, but the excitement of playing for him and seeing what he’s all about has brought a new level of anticipation to the start of camp.

“[Hakstol] is pretty organized,” Giroux said. “He knows what he wants. He has a vision and I think when your coach has a vision like that you want to follow it. We’re pretty excited to see how camp is going to go.”