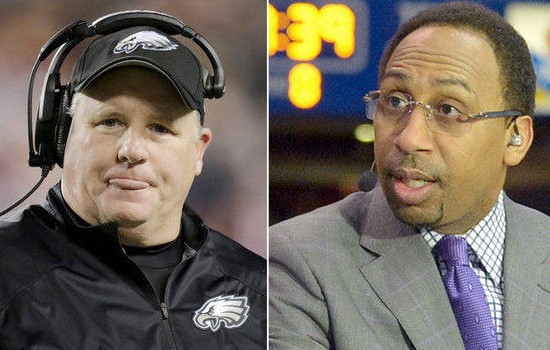 STEPHEN A. SMITH IS NOT AN IDIOT, HE JUST PLAYS ONE ON TV

Smith, of course, failed to mention some of the white veterans Eagles coach Chip Kelly has released, like James Casey and Todd Herremans, because that would undermine Smith’s thesis. And he also failed to mention that the player Kelly acquired in the McCoy trade, Kiko Alonso, is Latino

The assumption is that Stephen A. Smith is too smart to come right out and call Chip Kelly a racist. Smith knows that an accusation like that would require evidence, and Smith has none.

But if he is not an idiot, why does he play one on TV?

Smith did on “ESPN First Take” Tuesday is he merely implied that Kelly is a racist, going over a selection of Kelly’s recent roster moves and then hinting that Kelly might not want black players in his locker room.

“Chip Kelly makes decisions over the last couple of years that, dare I say, leave a few brothers feeling uncomfortable,” Smith said. “I think that’s fair to say. I mean, we’re sitting here looking at some of the decisions that Chip Kelly makes and I’m like what is up? What’s up with that? I mean, it’s like you’ve got to be his kind of guy, you know? And I’m like, well, Riley Cooper’s your kind of guy?”

By mentioning Cooper, Smith was implying that Kelly is OK with the fact that Cooper used the N-word in a much-publicized video in 2013. The truth is Kelly was not OK with that; the Eagles fined Cooper and sent him home from training camp. But Cooper’s continued presence on the team — combined with the release of a few high-profile black players — makes Smith question Kelly’s motives. According to Smith, Kelly isn’t only looking for players who fit into his system on the field. Kelly is also looking for players who fit into the culture that Kelly wants in his locker room, and Smith questions what kind of culture that is.

“Let’s get beyond the system, the operative word is ‘culture,’” Smith said. “The culture is what resonates with me more profoundly because I’m looking at a Chip Kelly and I’m like, really? Now, you’ve got to remember, where did I work for 16 years? I mean, this is Philadelphia. You understand what I’m saying? I’m always in Philly, and I’m telling you right now you’ve got people walking the streets and, hell with it, you’ve got brothers walking the streets going like ‘What’s up with Chip? I don’t understand this. I really don’t understand what you’re doing.’ Now I’m not saying I know, I’m just saying that it does strike me as a tad bit odd. I’m going to repeat this. Gone: LeSean McCoy, Jeremy Maclin, you know, DeSean Jackson. Staying: Riley Cooper. Really? Really? OK.”

Kelly has made dozens of personnel decisions with the Eagles, but Smith seems to see sinister motives in three of them: trading McCoy, letting Maclin walk away in free agency, and releasing Jackson. Smith, of course, failed to mention some of the white veterans Kelly has released, like James Casey and Todd Herremans, because that would undermine Smith’s thesis.

But, again, Smith didn’t say Kelly is a racist. Smith knows that a serious accusation like that would require serious evidence. And Smith has none.